I have referred to Matt Ridley’s articles in previous diary entries.

Last week’s (Thursday) Spectator only arrived here on Tuesday thanks to the bank holiday and postal workers taking a sneaky day off on Saturday.

Ridley’s article reads exactly as I have been arguing for days here but with much greater clarity and far more knowledge of the facts. If Lord Sumption set the moral and ethical case for ending lockdown (see last Sunday’s diary) then Ridley sets forward the practicalities based on what we know (and do not know) so far from the data.

Like all sensible people he ridicules Professor Ferguson and the Imperial College modelling which forced the government, so unwisely, into lockdown.

Everyone should read this to understand what a monstrous absurdity and financial disaster lockdown has been.

A week of cold NE winds which are drying up the nursery today.

Polygonatum multiflorum growing well beside the drive.
The old (and layered) Rhododendron campylocarpum looking a bit frail.
Magnolia ‘Judy Zuk’ opposite the mist houses.
Rosa banksia ‘Alba Plena’ at the front of Burncoose House.
Wisteria floribunda ‘Alba’ just coming out. Normally cut for Chelsea but not this year!
A nice little group of white violets opposite the kitchen window.
The original and very elderly plant of Colletia paradoxa (cruciata) growing behind Burncoose House.
On the way back I stopped to photograph what I think is a good Pinus mugo ‘Ophir’ growing in Carnon Downs.
At Monica Trudgeon’s garden in Caerhays Village a well clipped hedge of Senecio ‘Sunshine’ with a few flowers coming out.
Now that we have cleared the rubbish from the front of the old schoolhouse a fine display of mixed colours of aquilegia has suddenly emerged from the bare soil.
Rhododendron royallii ‘Caerhays Apricot’
This rhododendron was a gift to us. It is labelled Rhododendron ‘Chip Lima’ which may or may not be correct. Very good though!
CHW with a flower of Magnolia ‘Summer Solstice’ destined for the Garden Society’s centenary book. We cannot have a group photo in lockdown so this is how we have to do it!
This is another record of the last surviving original Magnolia sieboldii sinensis with masses of flowers this year.

Quite a few days recently of first ever flowerings here. Now Juglans ailanthifolia has some reddish flower spikes. Rather odd to put it mildly.
Now Daphniphyllum oldhamii also with its first flowers at about 6-8ft in height. A Crug Farm introduction. The new growth is spectacular.
A pale yellow deciduous azalea perfectly full out at Donkey Show. No name known.
The first flowering here for 20 to 30 years of Magnolia fraseri. As at Borde Hill this is out now but I remember the old trees flowering here only in late summer.
Rosa banksiae ‘Lutea’, one of my mother’s favourites, nicely out on a wall. After a severe pruning two years ago to make way for repointing the wall it is at last flowering again decently.
2018 – CHW
A trip up the drive to inspect azaleas that might cut for Chelsea. Rhododendron kuisianum and Rhododendron ovatum as well as Azalea ‘Black Hawk’ and Azalea ‘Ledifolia Alba’ are possibles.Although late in the day the new Metasequoia glyptostroboides ‘Amber Glow’ has just been planted in a very wet spot on the drive.
Enkianthus cernuus recurvus is full out with the edges of the fully out bells recurved. A dwarf form which is flowering better than ever before.
Sorbus ‘Cloth of Gold’ with attractive and very early flowers. Planted in 1993.
Another Staphylea pinnata (correctly named) just coming out. Planted in 2014.
Then to Burncoose to sort out the pot sizes for the two Chelsea Plant of the Year entries. The RHS supply the pots but they have to fit ours.
Justin has loaded a pallet of leaves, pots, bits of wood etc to be sent by courier tomorrow direct to our Chelsea stand to make more room on the lorry for loading plants later today. 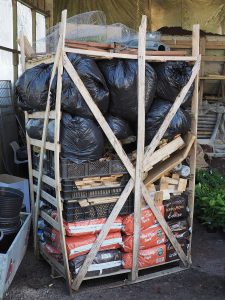 The rhododendrons for the stand have been put in the shade prior to loading. All but a few are in tight-ish bud and, so far, looking good.

2017 – CHW
Azalea ‘Caerhays Lavender’ just going over and the yellow new growth is fading to green. What a wonderful plant this is with the two contrasting colours.

Magnolia sieboldii ‘Pride of Norway’ is not out yet although other cultivars are as we have seen. Sieboldii ‘Colossus’ is not either.
Magnolia ‘Summer Solstice’ is full out in the garden. Simply gorgeous with its pink outer tepals. We have three or four put in shade in pots for Chelsea. This must be the best late May flowering magnolia by far now. What a spectacle and to think it took us years to notice it was even flowering!
A huge elderly clump of Rhododendron loderi which I usually miss during Chelsea week is out early. Quite a sight today.
A young group of three Rhododendron ‘Polaris’ flowering nicely.
The first flowering at Caerhays of Halesia macgregori. We had better make this plant deer proof and raise the height of the wire netting. Tom has much larger plants at Tregrehan.
Azara dentata I think with its flowers shining in the evening sun. Very full of flowers this year and showing up well which azaras generally do not – smell aside! Actually it might be Azara serrata but I forgot to inspect the underside of the leaves to check. I planted three species of azara here but one is dead and one looking very sick nearby. Azara microphylla ‘Variegata’ on the other side of the path below Donkey Shoe is now 15ft plus tall but no flowers out today. I guess it is Azara serrata actually as Azara dentata is much more tender and is probably the one which died.
Pieris japonica ‘Charles Williams’, named after my great uncle, is flowering late. This record tree has survived the ravages of phytophthera unlike many others here and in other key woodland gardens – especially Windsor.
The last survivors of the big clump of Rhododendron ‘Mrs Lionel de Rothschild’ which was destroyed by a falling Pinus radiata five years ago. A tough and reliable hybrid which is easy to grow.
Cut Rhododendron ovatum might make Chelsea as it did last year. Where there are no flowers look how advanced the new growth is! A relatively unknown and unloved species I fear.
Rhododendron kiusianum is coming out. This huge clump has a slight white star in the centre of its flowers when full out unlike the one in the Rockery seen last week. It is not quite a lilac form but there are much darker ones when one inspects the ‘Pocket Book of Rhododendron Species’ – you need a very large pocket or a bag!
2016 – CHW
The rhododendrons are at their peak; far too far on in the main for Chelsea and little time to appreciate and enjoy them while battling the RHS maladministration over our exhibitor’s tickets. We filled in the forms in late January! Too boring and incompetent to bother with here but, year on year, absolutely no improvement. Frustration and annoyance before we even load the first lorry on Monday. How do those idiots think we can put up three lorry loads of plants on our stand over six days with just four build up tickets? Rhododendron Naomi Group – in the rhodo planting above Rogers Quarry.
Rhododendron ‘Nancor’ (our own hybrid) might just make it for Chelsea.
Rhododendron ‘May Day’, bred by my grandfather,  A M Williams, is sadly far too far out for Chelsea. Yet another!
Magnolia ‘Woodsman’ x ‘Patriot’ (unnamed) is this extraordinary blue colour when it first opens turning a more yellow inside. Who would believe that there really is a blue magnolia?
Nothing on the planting records about this lovely group of rhododendrons which are pink in bud opening white. Not really loderi forms. They look like layers or certainly our own produced plants.
I had entirely forgotten that we even had a decent plant of Rhododendron thompsonii left in the garden after many failures. This species never does well in Cornwall as it hates our high rainfall and milder conditions. Mind you it did not look too healthy in the Valley Gardens at Windsor either last weekend. A difficult species.
A young plant of Rhododendron loderi ‘King George’ is just out. Missing out on Chelsea yet again. This is getting really alarming for our cut stuff next week.

Second lorry leaves for Chelsea so time to look for rhododendrons which will be over by the time we all get back from London.
Rhododendron aberconwayi – we seem to have three good newish lots of these which are developing a nice compact habit.

Rhododendron ‘Lems Cameo’ – I always seem to miss this but do not really like the colour especially when first out.
Rhododendron lindleyi – superb but the most short lived of the lot.
Rhododendron ‘Nancy Evans’ – no idea who she was but hardy and a good garden plant.
Rhododendron ‘Nancor’ – plastered in flower.  Almost a rockery plant (aureum x hanceanum).  Caerhays bred.
Rhododendron ‘Beauty of Littleworth’ an old hybrid probably unavailable in the trade today but a superb show.  Planted the two lots in about 1980 and 1991.  The former now relieved of the laurel hedge is flourishing.
Rhododendron concinnum – great purple but the flowers have a more open form than the Burncoose plant by the pond and are not as dark.
Royalii hybrids – just when we thought these had been lost too here are two colours.  An absolute must to propagate.  Perhaps they too have crassum in them rather than cinnabarinum?  Need to check planting records.  Superb nonetheless.   Seems to be a gap in the pre 1997 and post 1988 planting records.  Jaimie says that his predecessor, Philip Tregunna, gave up on these when I started doing the planting on days when it suited me and without him!
Rhododendron orbiculare – we have bought in several plants and raised several from seed since our original plant by the main quarry was soon to be dying.  All have smaller leaves, usually damaged leaves, and much smaller flowers than our original.  This one is a case in point.  Piss poor!  This species will not go from cuttings and the seed does not seem to be true or the seedlings robust.
Rhododendron davidsonianum – an original clump from Forrest 1932 expedition.  Note the colour variation between the plants.
I thought this tall growing upright red was called ‘Lord Aberconway’ but cannot easily find it in the reference books under this or a similar Bodnant name.  I am pretty sure Lord and Lady Aberconway gave this to my father one day when they visited Caerhays in the snow (and much to my mother’s disgust on Grand National day) at least 35 years ago.  It is 15 to 20 feet tall today and very upright.   I think, on reflection, that this is Rhododendron venator, a species?

1960 – FJW
Storms continue. Decorum x Orbiculare and Burmanicum x Dalhousiae have been very good. Laurel hedge behind Doltsopa and old Robusta have been cut back as has been hedge by Rogers Quarry.

1938 – JCW
Megacalyx giving a lot of flowers. Smellies just as good as they have ever been. Auklandii has been better than I ever saw it before. Davidsonianum goes back.

1924 – JCW
I go to Scotland tomorrow, we are a few days behind 1904, 20 Fortunei open, Augustinii over. Callimorphum very good. Dalhousiae open.

1905 – JCW
Just as above, all the daffs have gone but Recurvas and the double. Azaleas near their best. A good many roses. R dalhousi very good.

1904 – JCW
The maples, Auklandii’s and bluebells are at their best. Fortunei, Royali and C montana are half open.