The first flowers we have ever seen here on Disanthus cercidifolius. Tiny and I had thought to expect these in the spring. Very similar to Disanthus ovatifolius (previously Uocodendron whartonii) which proves this name change makes sense. What else has flowers shaped like these? Asimina triloba perhaps?

The colours on the Disanthus cercidifolius have developed well over the last fortnight. This is a very special autumn colour plant.

2020 – CHW
In the clump at the bottom of the Auklandii Garden three of the US Ackerman hardy hybrids are out but another four varieties are not yet. I may be wrong as ‘Snow Flurry’ and ‘Winter’s Snowman’ are very similar and both could be out.

Camellia ‘Snow Flurry’ (Camellia sasanqua x Camellia oleifera) full out.
Camellia ‘Winters Toughie’ (Camellia sasanqua x Camellia oleifera) more or less full out.
Camellia x williamsii ‘St Ewe’ is now starting to perform high up in the Auklandii Garden clump.
Squirrels are carrying and devouring the clumps of Lithocarpus pachyphyllus a long way from the trees themselves.
A totally different autumn colour on this clump of Enkianthus serrulatus to the dark red colours on the plant (a layer) which Tom gave us and I photographed rather earlier in the autumn.
The largest and oldest of our Camellia oleiferas is almost over. Interestingly the Chinese book on the ‘Collected Species Of The Genus Camellia’ (Gao, Clifford Parks and Du) shows a rather different form of C. oleifera without the bulbous buds.
This is attached for comparison. Our plant’s flowers tend to droop downwards and are hard to see. Then we look at the similar Camellia confusa in the same book and it still is not quite the same as this but our supposed C. oleifera is closer to C. confusa than to C. oleifera. Undoubtedly our original plant is a Wilson or Forrest original. It self-seeds itself in several places around the garden.
Still a decent late flower head on Escallonia bifida.
2019 – CHW
The very first flowers this year on Camellia x williamsii ‘St Ewe’ in the Auklandii Garden.Another set of rather younger Stewartia than the ones which we viewed a few days ago in Kennel Close with autumn colour and some seeds. These are in the new Styrax/Stewartia planting area beside the old Charlie Michaels Nursery bed.This is labelled Stewartia sinensis. Good autumn colour but the seeds do not look quite right when I look at the ripe ones with five segments. However when I look at the ones still greenish-yellow and much more rounded they do look like the seed heads in Koen Camelbeke’s article dated 16.10.11.
This one is labelled Stewartia monodelpha. No autumn colour but dry ripe seed heads with (also) five sections. No unripe ones so difficult to tell if they do conform to the Koen article which shows only green and unripe seeds.
Another S. sinensis with no real autumn colour and only ripe seeds. They are much like the S. sinensis seeds above but no unripe ones here.
Stewartia serrata has a very distinct blackish-purple hue if it is indeed true to name? We have a few other plants from different sources which do not have this distinct autumn colour. No seeds as yet.
The Stewartia muddle here with acquired and gifted young plants needs a lot more work yet as you can see. Perhaps the autumn colours in some species are quite variable? Anyway, between the eight plants viewed recently we certainly have some sorting out to do.
2018 – CHW
Cotoneaster dammeri ‘Hybridus Pendulus’ growing well in a garden on the estate and looking superb today. Hilliers say it is a hybrid between C. dammeri with either Cotoneaster frigidus or Cotoneaster salisifolius. The berries are slightly red with a bit of yellow but perhaps not yet fully ripe.
Euonymus europaeus with a good crop of fruits too which have yet to split to reveal the orange seeds.
A few excellent autumn colour photos on the drive today.
2017 – CHW
A good crop of seeds to gather on Styrax ‘Emerald Pagoda’. Large flowers and equally large seeds on this superb plant. No other styrax anywhere near.
A young Rhododendron keysii with plenty of flower. Not unusual!
Peumus boldus just coming into flower. It should be out in the summer according to Hillier’s. We do evergreen cuttings anyway. I think it was flowering now last year.
2016 – CHW
Nyssa sylvatica ‘Wisley Bonfire’ on Burns Bank is superb in the sun. This is a new entry in the 2017 Burncoose catalogue and will be a certain hit. 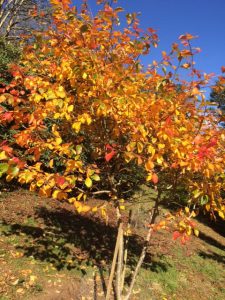 2015 – CHW
Progress has still been slow in developing the autumn colour on the four liquidambers:
Liquidamber styraciflua ‘Oconee’ has just a few hints.

Liquidamber styraciflua ‘Gumball’ has just one spray at the top which is going purple.
Liquidamber styraciflua ‘Kia’ is not bad but not as good as ‘Red Star’ which we looked at last week. This one has now half shed.
Just beside ‘Oconee’ I stumble across Quercus nuttallii which is a new species to me/Caerhays. It has a rather impressive brownish purple display of secondary new growth despite being in full sun in a dry, sloping spot. It is not listed in ‘Hilliers’ or in ‘New Trees’ so I can tell you no more.

1955 – CW
November Pink well out. Even saw some flowers on Camellia noblissima. Very early year. Mucronulatum full out as is Yellow Hammer. Received Sasanquas from Edinburgh.

1945 – CW
Camellias sasanqua and oleifera out, also a couple of flowers of hybrid in big quarry. One Saluenensis in the way of a Pink (dark) form above Crino hedge fit to pick, just opening. A lot of daffs up. Some fuchsias and lapagerias. One Mag delavayi open and a bud on Michelia by Engine House, and Engine House double white camellia.

1940 – CW
A few Mag grandiflora left – no others but buds on Delavayi. There has been a little frost but fuchsias not hurt. A lot of rain in the last weeks. Some daffs coming up. Camellia sasanqua good. One flower of Camellia oleifera out on wall for some days. Rho davidsonianum hedge much flower east end enough for a big lot in hall.

1926 – JCW
C sasanqua are and have been nice. Lapagerias good. The first Iris stylosa a week ago. The worst year for medium and early rhodo’s, as bad I ever saw. Later sorts are good.

1912 – JCW
Just as above but Primula malacoeides replaces Iris alata.