Magnolia ‘Burgundy Star’ just out on a warm sunny day (at last). What a colour and what a shape to the flower.

The huge Michelia doltsopa by the Acer griseum full out today with only a little damage from the storms last Saturday.
First colour showing on Magnolia ‘Caerhays Surprise’ in the Ririei Opening. Other plants are further out and the original ‘Caerhays Surprise’ has a few full out flowers high up at 20-25ft.
Another Magnolia ‘Felix Jury’ on the drive.
Magnolia ‘Iolanthe’
Rhododendron kiyosumense comes in a variety of colours. Here a darker one on the drive.
Magnolia ‘Tina Durio’ slightly damaged in the wind.
Magnolia ‘Tina Durio’ and Trachycarpus fortunei which offset each other nicely.
First flowers out early on Magnolia ‘Genie’.
Magnolia ‘Sunrise’ is yellow in bud but fades to cream with a pronounced red stripe.
Magnolia ‘Avocet’ just out in the Isla Rose Plantation.
Flowers nearly over on Buddleia tibetica.
A young plant in the nursery bed with its first flower. The impressive dark pink form of Rhododendron moupinense. Never seen this before.
2021 – CHW
Sunny and still again.The Queen Mother’s 1981 planted Magnolia sargentiana var. robusta seedling.
Camellia ‘Italiana Vera’ – a ‘new’ one bought from Stervinou nurseries in France.
Slightly battered Magnolia ‘Charles Raffill’.
Last shots of a perfect Magnolia ‘Philip Tregunna’.
Rhododendron arboreum ssp. zaylanicum (?) tucked away in the former nursery bed by Donkey Shoe.
Magnolia ‘Rebecca’s Perfume’ in the Isla Rose Plantation – scent overpowering!
Magnolia ‘Big Dude’ now a single flower from above.
The best magnolia in the garden today is the Magnolia campbellii alba seedling in the Auklandii Garden.
A windblown branch of Cryptomeria japonica by the front door with last year and the year before’s seed cones.
In the distance a good magnolia in Old Park – Magnolia sargentiana var. robusta.
Magnolia sprengeri ‘Diva Westonbirt’ just coming out. First time proper flowering.
The original Magnolia ‘Kew Surprise’ in the Rookery is splendid today.
2020 – CHW
Last Saturday I spent some time admiring the alpine glasshouse at Rosemoor.Cyclamen repandum
Ipheion ‘Rolf Fiedler’
Ozothamnus coralloides
Ipheion uniflorum
Ipheion uniflorum ‘Charlotte Bishop’
Narcissus bulbicodum (as we saw naturalising so well in the garden)
Anemone pavonina
2019 – CHW
Flowering male catkins on Sinowilsonia henryi. The female catkins are in pendant racemes but none are visible yet. I have never seen catkins on this smallish spreading tree before. This is a very rare Wilson introduction and is related to Hamamelis.
First full out leaves on a sycamore.
Our first ever flower here on a young Melliodendron xylocarpum. We have planted about half a dozen plants out in recent years but nearly all have failed to survive which is maddening. Hopefully this one and a couple of others will now develop into smallish erect trees. Tom Hudson’s plant is in full shade on a steep bank. Perhaps ours were in too much sun to start with? The rarer the plant the more difficult it is to get it going.
The flowers on Magnolia nitida are now nicely out. Note the reddish stripe up the centre of the petals. A good show this year unlike last.
The first yellow magnolia to flower this year is Magnolia ‘Sunray’. Two flowers out today.
A nice clearing for a batch of specie rhododendrons which have lifted well from Higher Quarry Nursery.
A Magnolia rostrata which was planted in 1999 has developed attractive bark on its main trunk. Here resplendent in the sun.
A nice empty nursery bed and the next lot to be planted to grow on.

2018 – CHW
Another fine planting day after yesterday’s deluge. We still however need another day to finally complete this year’s planting programme. Still the Drive to do and Old Park. The odds and ends take rather longer to sort out and carry around than the main new planting areas.Attached is a list of the latest influx of plants from Burncoose and other nurseries. Some large enough to plant out, while some need growing on for another year or more in the greenhouse.Another load of plants from the frames ready to go out.

Lindera sericea just coming out. Not seen properly before. Multi-stemmed and vigorous.
Rhododendron barbatum was just showing colour before the cold. Largely untouched and full out now.
A new Camellia ‘Fire ‘n’ Ice’ with its first flowers.
Camellia ‘Hooker’ is another new one – an odd shaped single. I wonder about the origins of the name?
Camellia ‘Carolyn Tuttle’ is also new.
The Forsythia which we saw out unusually early in November is now out again but with only a very few flowers. 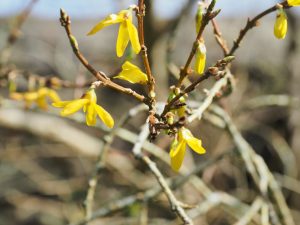 Peace and quiet again after the excitements of the VMH yesterday. Jaimie’s hangover held up well, mine is still developing!
2017 – CHW
A rest from magnolias!Some tiny flowered narcissi by the side door – nice scent.
The ancient bergenia clumps touching the castle drive are waking up and into flower.
Primroses galore now on the bank.
Apologies; I could not resist yet more of ‘Caerhays Belle’ in the sun.

2016 – CHW
The bluebells are coming on well outside the front gate.

Nothing quite beats Rhododendron ‘Cornish Red’ for size and scale. We have seen odd branches out since November but this is now the ‘real deal’ by Four in Hand.
The best (and truest) of the two Magnolia dawsoniana seedlings is just out at the very top of the tree outside the front gate. The birds have really started their spring chorus and the swans are fighting off the Canada geese on the lake. I will give them a little help with the battle later this week.

A distance shot from the front door of the magnolia above the wall (see yesterday).

A hectic week ahead. Speech at the Cornwall Red Squirrel Project dinner at Boconnoc on Thursday, RHS lecture here on magnolias on Friday, then guests for the gardening weekend (three from Holland).
2015 – CHW
The story of Magnolia sargentiana (pure) is an odd one. The original plant at Caerhays has flowered only once, in 2012, when it had narrow extremely floppy tepals which hung down from the flower. It flowered on just one branch. It had not flowered before in my father’s or my lifetime but, when it did, the flowers were exactly as depicted in the watercolour in George Johnstone’s 1950s book on magnolias. We purchased from Eisenhut Magnolia sargentiana pure thinking it was from scions we had supplied and planted it in pride of place where the original Magnolia sprengeri ‘Diva’ had died. Hillier Manual (2014 edition) continues to describe the flowers of Magnolia sargentiana as upright, cup shaped and like ‘large water lilies’. John Hillier observed the new plant in 2013 at an early flowering and confirmed the flower was exactly like the plants in the Hillier arboretum of Magnolia sargentiana pure. Clearly this can now be demonstrated to be a huge and enduring case of mistaken identity. The real flowers of Magnolia sargentiana pure are not even faintly like a water lily although the ‘rogue’ is very nice indeed and well worth a name in its own right which should probably be ‘Caerhays Water Lily’ to amuse future generations. However Jaimie says it is actually Philip Tregunna.

1919 – JCW
Rhodo’s much as in 1917 it may be a bit further on, daffodils well ahead with a good bulge on the bud of our early poets (red and white). Prunus conradinae is over. Subhirtella not yet open.

1914 – JCW
One Cam reticulata on wall by Library. R argenteum and most arboreums at their best. Some trumpets but a few incomps open. The best white Arboreum is hardly open. Barbatums well on, a few P Mary.

1913 – JCW
A few reticulata, and bad ones, open. We have nearly reached the poets in daffodils. Ciliatums going over, the best white Arboreum is well out, some Barbatums over some partly out – half the Tin Garden P Mary open.

1906 – JCW
We are distinctly ahead of 1903. R shilsoni on the wane, White Queen fit to force for pollen. Many reticulatas open.

1903 – JCW
Sir Watkins, Emperor, Horsfieldii, 116, Artemis all out and Princep Mary, Albatross, Seagull, Caerhays, G Spur, H Irving, Maximus and Victoria at their best, King A, Sirius, G Bell and RRB well out. [?] at their best and so are R wilsonii, barbatum and most of the arboreums.

1901 – JCW
An odd Victoria open, 23 nearly open, one Ciliatum early seedling, but hardly any of the above are even near opening.