An email from a diary reader in Germany concerning the unusually variegated Camellia ‘Kerguelen’.

Here are a few pictures of our own plant showing exactly the same problem with older and unsightly leaves. Nothing to worry about really I suspect. I have replied accordingly although I am surprised this obviously delicate variety can be grown in Germany. Mr Schroeder wisely covers his plants in fleece for the worst of the winter.

2020 – CHW
The large Eupatorium ligustrinum on Bond Street looks to be in flower but most of the flowers are seed heads.
This is the unidentified spiny plant on Bond Street which must, I think, be a Crûg Farm Zanthoxylum species. Need to look up as no label.
A few white berries left on the shrubby Sorbus harrowiana.

Then another look at our new cotoneaster collection:

The rare Cotoneaster songoricus from Kazakhstan now has berries.

As does Cotoneaster fangianus from Korea which (as here) has light red ‘nutlets’ in twos or threes according to the Fryer/Hylmö reference book.
I had not noticed the few yellow berries on Cotoneaster ‘Rothschildianus’ a fortnight ago. The berries are yellow (and stay yellow) unlike the similar Cotoneaster ‘Exburyensis’ whose berries are eventually pink tinted. Not so you would notice much though.
The best set of berries on show today came from Cotoneaster thimphuensis from Bhutan which exactly matches the picture in the reference book.
Cotoneaster wilsonii still looks very good but quite a few berries have dropped already.
Boris has announced a three tier traffic light system for lockdown in England. Cornwall is rated as ‘medium risk’ with less than 50 cases of COVID-19 per 100,000 of population. No further lockdown restrictions for us as yet and our shooting season can continue for now. The Cornwall tourist board is actively encouraging tourists to come here for half term unlike their demands to keep away in June. More and more people are questioning whether the knock on effects of lockdowns on the economy and people’s health/wellbeing generally outweigh the (death) risks of the virus. This is common sense as I have argued all along. The public mood may be close to changing.
2019 – CHW
The sasanqua camellias have arrived from France for Beatrice’s christening planting at the entrance to the Old Park probably in February 2020. There may be a chance to get these in the ground shortly. Most of the
flowers have been shaken off or damaged in transit but more buds to come. Exciting new things for the garden!
Amongst them is Camellia sasanqua ‘Elfin Rose’ which is new to us. Small but pretty and an odd pinkish-red colour.
I went to see if there was any fallen seed under the Manglietia insignis in the Rookery. Nothing, sadly, but underneath the adjacent Quercus acuta there were loads of acorns. All the clusters are sadly too small to be viable (like the Q. lamellosa acorns seen earlier) BUT I did find 2 decent acorns which had formed properly as you can see. Asia can try these and perhaps inspect the other large Q. acuta trees to try to find a few more decent acorns. We have never found acorns on Q. acuta in the past. 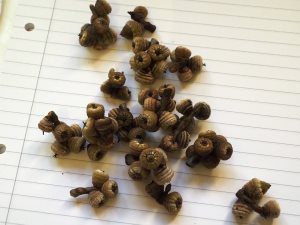 So back to the Sorbus problems mentioned a day or two ago. The first of these leaves is from what is labelled here as Sorbus wilsoniana. Most of the leaves on this young plant have already fallen and this small leaf does not have 7-9 pairs of leaflets but I suspect it is true to name nevertheless. The second two pictures are of a leaf from the supposed Sorbus sargentiana which does key out more or less correctly (IDS yearbook 2019 again Pages 62 – 66) as far as I can see EXCEPT that the fruits are bright red and not orange as they should be. Neither appear to be Sorbus splendens. So the muddle and confusion persists unabated. I must get Tom involved in this quiz or debate.
To try to explain – these 3 Sorbus species have been muddled for years but, only recently, has S. splendens been determined as a separate and exciting new species.
Sorbus splendens – leaflets in 4-6 pairs equal at base, fruits dark orangeSorbus sargentiana – leaflets in 4-7 pairs with pale hairs below, fruits orange (not how the
third picture shows the leaves)Sorbus wilsoniana – leaflets in 7-9 pairs, glabious but pale in colour below, fruits red. (ie the second 2 pictures featured here – PERHAPS! but search also for earlier pictures of fruit of this species in the diary)I am not allowed to copy the IDS yearbook but you can see more details of these 3 species (without being and IDS member) on their website.
2018 – CHW
Cotoneaster moupinensis with large black fruits. The first time we have seen these on a young plant.
The seeds I photographed earlier on Sorbus wilsoniana have now turned an attractive bright red.
Even now the remnants of The Beast are still showing up. Luma apiculata (Myrtus luma) has considerable bark split from the cold although the scars are starting to heal naturally. I was quite surprised that more of our Myrtus luma did not die in the cold easterly blast but the damage is still evident.
Nearly ripe seeds on Camellia reticulata ‘Mary Williams’.
Clethra pringlei is now full out. The very last of the Clethra to flower here. It looked badly damaged in March but has clearly recovered enough to flower properly.

Another clump of Rhododendron ‘Norfolk Candy’ full out by Georges Hut.

The Cladastris kentuckea has already shed almost all its leaves. We saw it starting to colour only three weeks ago but have missed it at its very best.
Another one for David West! What is this cotoneaster then? Berries just starting to turn yellow and plenty of them. A drooping habit from 20ft or so and very distinct bark. This, like the other cotoneaster, was a 1991 gift from Windsor.
Little seed on any of the Michelia doltsopas this year and far from ripe yet.
The huge seed pods on Magnolia sargentiana robusta in the ririei clearing are shedding to the ground from the open pods high up the tree. Time to start collecting them on the ground before the mice get them.
2016 – CHW
I thought we had a second, more mature, medlar and here it is, laden with large fruits, in Kennel Close. The tree needs re-staking but may already be too large to re-erect.
Sorbus japonica has its first ever ripe seeds. Only two clusters and I missed the flowers. Nice foliage with silvery undersides. It has made good growth since planting in 2009 although not in a very visible place.
The rare Carpinus tschonoskii has reddening autumn leaves on the ends of its new growth. Rather attractive and unexpected on a hornbeam. There are several new (to us) species in Kennel Close and this is the only one with decent autumn colour.
Styrax americanus is laden with seed and, although the leaf is dropping, they are still not ripe.

No hint of autumn yet on Quercus dentata ‘Carl Ferris Miller’ which has enormous and beautifully formed leaves. These fade late in the year and remain on the tree over winter. Signs here and there of major secondary new growth after the rain. What a tree!

1994 – FJW
After a wet September, we are now enjoying a fortnight of Indian summer.

1933 – JCW
I came home from the north. There has been a lot of rain after a big shortage.

1932 – JCW
I came home from the north, a very favourable summer and it looks as if magnolias and rhododendrons have a fair lot of buds. Clematis panniculata is very good indeed. Hydrangeas are nice, are not very blue.
Fuchsias for the first time are most excellent, they give us more colour and variety of colour than any other shrub.

1912 – JCW
I came from Scotland. Hydrangeas good, and so Solanum.. The flower of Rho auriculatum open and some R decorum and keysii. C corymbosa good, a few roses about.