White bluebells in a bluebell clump.

A large gathering for Lord Falmouth’s funeral yesterday in the cathedral (George was 102) with a few Boscawens due to enter the show at the Savill Garden on Saturday. We will still be tied up with trenches.
Badly frosted Gunnera manicata below the Kennels. As ever the bottom of Old Park has caught what little frost we have had this week. Elsewhere in the country everyone is moaning.
Unfrosted nearby however is the first flowering of Jaimie’s latest cross. Magnolia ‘Atlas’ x Magnolia sargentiana (pure species). M. sargentiana has flowered only once in 40 years and this was used as the pollen parent for this cross in 2009. You can see the elongated tepals of M. sargentiana but overall the flower is darker in colour than I would have expected from a M. ‘Atlas’ seed parent. It may yet fade. Five flowers in bud, nearly out and one more frosted.
More of the newly planted Amelanchier collection have their first flowers:
Amelanchier ‘Jenny Belle’
Amelanchier laevis ‘Snow Cloud’ (‘Majestic’)
Amelanchier grandiflora ‘Robin Hill’
Amelanchier ‘La Paloma’ F.C.C. – large flowers and large clusters.
Amelanchier laevis ‘Snow Flakes’
Amelanchier asiatica (1978-2124 H.A.) with very different leaves and flowers.
Amelanchier laevis ‘R. J. Hilton’ – pink in bud
Amelanchier alnifolia ‘Pumila’
Frosted Magnolia ‘Golden Cup’.
Dogshit on sticks!
However Magnolia pseodokobus ‘Kubishimodoki’, a little higher up the bank, is untouched by the frost.
The trench to the café for the waterpipe and three-phase electric supply to the café is now fully dug on the castle front.
And across the car park in the deep sand. Western Power turn up at 10.30 (two vans) to lay the electric cable in our trench dug at our expense. The cost of the work is £24k without allowing for our staff time or the cost of the digger and Frankie to drive it.

2021 – CHW
Ilex centrochinensis (or possibly Ilex corallina) in flower which I have not noticed before.

2019 – CHW
Just out is Rhododendron soilenhense and perfect for entering in the Cornwall Garden Society show at Wadebridge this weekend.

Tin Garden partly planted up and watered in. Rabbit wires in place.
Prunus ‘Horinji’ just out. These few cherries in Kennel Close have grown and developed very quickly. This is the third one out here this week.
Last year the team got rid of the ivy growing up many of the deciduous azaleas on the main drive. It was smothering them and several had to be cut back hard to get at and remove the huge ivy roots. However there remained five awful flowering clumps of ivy in good azaleas by Trevanions Holly and the Four-in-Hand. I have been moaning about these for months so today I got a billhook and did the business on the lot (without digging the roots). When anyone notices it dying off I will, of course, be told that I have only done half a job and they will be right!
First flowers showing on Rhododendron ‘Elizabeth’ which is early.
Likewise on Rhododendron ‘Tessa’ (moupinense x ‘Praecox’) which is a bit later than usual. It is more of an evergreen small shrub than Rhododendron ‘Praecox’ as you would expect.

2018 – CHW
To the Savill Garden for the RHS rhodo show. Click here to ALL see the exhibits we saw during the set up after six hours on the road and a dreadful journey to Windsor, with a few highlights below:

Camellia ‘Les Jury’ which we have just planted at home 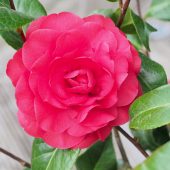 Perhaps a dull list but a useful pictorial reference library for the future. A far better show than seemed even faintly possible only a week ago. Crown Estates won the three main challenge cups and deservedly so. We can only have been the odd point away from the magnolia cup. If only our Magnolia ‘Albatross’ had not been knocked or blown over!
2017 – CHW
A rhododendron planting day from three nursery beds – approximately 80 plants – mainly species.Azalea ‘Hana-asobi’ in full flower. Hose in hose flowers. Behind it is one of the last surviving Azalea ‘Shin-sekai’.
Lifting root balled rhododendrons from the Orchid House Nursery bed. We have cleared this bed now and will re-fence it in the summer.
We saw Rhododendron concatenans in flower before Christmas but these were odd secondary flowers. Here is the proper job!
Another plant of Rhododendron kiyosumense full out but a month later than the one on the drive of a similar size. This is a sub species of Rhododendron reticulatum from Japan and the reference books say that there are several forms.
The elderly but huge clump of Rhododendron loderi ‘King George’ is just coming out. Smaller plants are full out already as we have seen.
Rhododendron veitchianum just coming out in Donkey Shoe.
Schefflera alpina is hidden away in a glade but doing quite well. Does not look that ‘alpina’ to me!
FJW’s cross of Rhododendron moorii x Rhododendron euchates just out by Georges Hut. This is not the best form.
At last we have a Magnolia stellata ‘Jane Platt’ which is actually true to name and pink! Several times Burncoose have been supplied with non pink forms in the past leading to hassle and replacements.
Rhododendron sinogrande ‘Lord Rudolph’ just breaking bud. Judges at shows do not like us entering this one as we (and nobody else) seems to know its origins. The old plant here grew in a crater just inside the corner of Bramble Field gate.
2016 – CHW
A mad rush to clear up after yesterday’s invasion and prepare the rhododendron archive for viewing by the RHS Rhododendron, Camellia & Magnolia Group members who visit us tomorrow for lunch/tour/archive in this their centenary year.The magnolias and other flower arrangements outside the front door have survived from yesterday in good order but the wind is strengthening now. The glass vases are not vases at all but were part of the electricity generating equipment in the Engine House at the Pound which was built pre WWI to supply two plugs per house and electricity to the estate.
Outside the front door the arum lily (Zantedeschia aethiopica), which has not turned a hair all winter, now has five flowers out.

Beside it is a clump of dwarf narcissi which are just going over but have a superb scent.

A pot of double flowered daffodils with a reddish orange centre are looking good by the door but the label has vanished.

If ever there was a competition for the most irritating visitor comment on the garden it would have to be on completion of their garden tour: ‘aren’t the primroses lovely’.  Yes, of course they are, but how could you not gaze up in wonder at a magnolia or a bunch of rhododendrons!  So many visitors never look up!  Perhaps we should sell Easter tickets just for primroses just as the snowdrop gardens do in January/February.  Then everyone could just look at their feet.

I wonder why the three Vaccinium floribundum above the greenhouse which were doing so well have suddenly all died?

Magnolia ‘Tina Durio’, a pure white, is the best plant in the clearing above the greenhouse.   There is a larger and more impressive plant in 40 Acres.  Perhaps a better shape than Magnolia ‘David Clulow’. The next plant to it is labelled Magnolia ‘Big Dude’ but it is not a very big flower and the correct plant is probably next to the big new Sequoiadendron giganteum.

The rhododendrons are starting to rush out after a mild and mainly sunny Easter weekend.  Rhododendron edgeworthii has sprung from nowhere and the huge Rhododendron arboretum (white) which is nearing the end of its life is having one last triumphant display on Burns Bank.  Rhododendron ‘Endsleigh Pink’ is an old hybrid but well worth its place.

Betula albosinensis above the greenhouse just large enough to start its bark peeling.  Two older specimens in Penvergate are much better and now 20 years old.  Very different at present from the Werrington ‘Chinese Garden’ and ‘Bowling Green’ (now called ‘ChinaRuby’) forms of Betula albosinensis which I remember growing at Donkey Shoe as a child.  The Werrington Forrest collected form (1910) had creamy white peeling bark flushed pink and maturing to coppery red.  Too early to say if any of these three will be ex Werrington but I did buy both forms from Thornhayes Nursery 15 to 20 years ago.  ‘China Ruby’ is now listed by Burncoose and probably qualifies as the ‘must have’ betula. Time to check the computerised planting records again.

A simply gorgeous day with 428 garden visitors and a coach load on top.  Much the same numbers as we used to get on our pre 1992 one (charity) day a year of opening.  340 on Easter Sunday so the marketing of the garden is working.

1934 – JCW
Prunus sargentiana may have 70 blooms on and all that lot have flowered.

1931 – JCW
Very nearly as in 1924 two of Wilson’s denudata are showing flowers, one is pink like the mother and the other is a pinkish white. Lutescens is good again after one knock out by the frost and then another by the wind. Pink pendulous cherry is at its best.

1924 – JCW
Poets just starting, yellow trumpets fair. Been cold and dry for a long while without rain. No cherry in drive yet. Subhirtellas nice also incisa. Mag denudata not open. Not much behind 1921.

1921 – JCW
Poet’s open and daffs on the wane. No yellow trumpets left but nice Leiden and a little colour. Rho amoena at their best. Cherries in Drive very good. Magnolia conspicua, denudata and stellata are all good. The red and white Auklandii types never so good. Bob’s heath in flower and has been for a month or more.

1915 – JCW
Many daffs open but no Poets, not the M de Graaf in the drive, all the trumpets and incomps are at their best. Prunus pendula just opening. R racemosum in the drive very good but not all out.

1897 – JCW
I made my first visit to Appleshaw with PDW and bought my first lot of daff seedlings.