A nasty flip back to cold east winds today but still a few new magnolias flowering.

The grandchildren picking pheasant eggs in the laying pens yesterday. Easter eggs for all! The first batch will go into the incubator next Friday. We all picked 300 eggs at 4pm and 600 were picked at midday.

Prunus ‘Shirotae’ now suddenly full out on the drive. I fear the wind will ruin what is always an all too brief but wonderful display this year.
Rhododendron bauhiniiflorum just out.
Prunus campanulata ‘Felix Jury’ is a gorgeous red – three plants in Tin Garden.
The clump of Leujocum aestivum ‘Gravetye Giant’ now full out.
Three small plants of Rhododendron cumberlandense putting on a show.
Magnolia ‘Sulphur Cockatoo’ (Gresham Hybrid) not yet doing much.
Magnolia ‘Chamaeleon’ not that impressive either.
Magnolia ‘Rose Marie’ x Magnolia ‘Black Tulip’ (Ledvina cross) is good and in a prime spot by Georges Hut.
The tiny Magnolia ‘Mighty Mouse’.
2020 – CHW
So I have been reading all week speculation in the media about how many people in the country have already had the corona. The clear implication is that people who have it without dying or visiting the beloved NHS have not noticed that they have ‘had it’. Whether one in forty infected overall in the country is even faintly accurate, as the newspapers suggest, we have no idea.If it is the ‘herd immunity’ approach, as in Sweden and Norway, then they may have a thing or two to tell the UK. It may even be part of the original government plans as they so unwisely (media wise) unwittingly told the nation nine days ago.

At the moment it is all about tests or the lack of them. BBC bleating from the safety of their very well paid sofas on Zoom at home of course.

If you have actually had the corona then I am pretty sure most of you would have actually noticed being ill? Why do you need a bloody test to prove it, and your then supposed, immunity? Bugger off back to work and no more excuses – but we must have a test!

If you track the BCC (early morning especially) you can follow the reality of an INDUCED and DELIBERATE panic. Each day there is another ‘reasonable’ demand on the government which, when satisfied, then moves on to another supposed outrage.

In a war the media should be controlled even if the government is wrong, makes mistakes, gets overtired and is fallible in its judgement/decisions.

So the Germans (we are told) do ‘testing’ so much better than us? They have generally started wars well but ended up rather less well!

Yes we will get ‘tests’ (of two sorts) eventually but what will they tell us other than the bloody obvious? I refer you back to yesterday’s missive about the NHS staff and local hospitals at present. Much bullshit and little common sense here! Go back please too to the Spectator article about death recording as well which was featured in this diary.

I rest a case which may be as wrong as Neil Ferguson’s advice to the government during the 2001 foot and mouth epidemic. Foot and Mouth Disease 2001 Inquiry Report

I wonder when we will see the first house martin back here?

Torreya taxifolia with flowers about to come out along and under the twigs. We have gathered fruits from this before.
A young Magnolia ‘Honey Tulip’ above Hovel Cart Road. These flowers were much larger on pot grown plants in the nursery and I am hopeful they will improve with age. Just a hint of ‘tulip’.
Magnolia ‘Spectrum’ rather faded and battered about (Magnolia liliiflora ‘Nigra’ x Magnolia sprengeri ‘Diva’). I have seen a few ‘Spectrum’ over the years and cannot be certain that this one is true to name. It has produced much darker flowers in the past.

Podocarpus acutifolius has a good orange-yellow glow even before the new growth appears. This is becoming a huge spreading shrub.

Another near failure with a tender new plant. Dendropanax japonicus has only a few leaves left. I put it in too cold a place!

A young Acer erianthrum is early into leaf with coppery new growth.

The sad stump of the last Quercus x ludoviciana growing here which succumbed to Phytophthora a few years ago.

COVID has created more time to deadhead young rhododendrons to stop them seeding. Too early in the year really for this job now but I find a white form of Rhododendron nobleanum to deal with as here. Newly planted.

The first full out bluebell I have seen with true blue colours.

In the old Hardy & Bert’s nursery (former gardeners) I find a Magnolia sprengeri ‘Diva’ seedling still full out in the sun which is invisible from the drive below.

And another elderly clump of Enkianthus perulatus by Hardy & Bert’s.

Masses of violets on Sinogrande Walk.

Amelanchier sanguinea which I had not seen in flower before. Not yet very vigorous.

A larger Taiwania cryptomerioides than the one we looked at recently. Spreading habit with no obvious leader as yet.

I think this is Pseudotaxus chienii which is a shrub with yew like leaves and, one day, white berries if we are lucky.

You really do not see too many common holly berries in April!

Corylopsis willmottiae (now sinensis) ‘Spring Purple’ (because of its new leaves) looking splendid in the sun.

So now a viewing of more of the Betula species and varieties which we have quietly assembled in the last 10 years or so.

Betula ashburneri with its first catkins. A gift from Stone Lane Gardens and their national collection of Betula.

These eight plants were planted above the drive in 2008 (another three died along the way). Several are 10-15ft tall and one is nearer 30ft.
Betula utilis ssp. albosinensis has enormous catkins all over the tree and the bark is just starting to peel nicely.
Betula pendula ssp. szechuanica ‘Liuba White’. The catkins have individual flowers with red centres. Catkins in profusion all over.
Betula dahurica ‘Maurice Foster’ (formerly Betula davurica). A very rugged bark and now 25-30ft tall in only 10 or so years. Phenomenal growth in a cold exposed position. Catkins are over.
Betula utilis ‘Doorenbos’ (‘Snow Queen’) living up to its name. Unripe catkins are in pendulous trios.
Betula ermanii ‘Greyswood Hill’ with erect catkins not yet fully formed. The trunk is not yet quite a match for ‘Greyswood Ghost’ and some lower branches need pruning out so the trunk can better be seen from the drive below.
Betula utilis var. jacquemontii ‘Greyswood Ghost’ – catkins in trios. Only at the base of the tree has the peeling started properly.
Betula utilis ssp. jacquemontii ‘Jermyns’ is plastered in catkins too. Look at the colour changes between the younger branches (dark), more mature branches (reddish) and the trunk (white). Named by Sir Harold Hillier.
Betula utilis ssp.jacquemontii ‘Silver Shadow’ – named by John Hillier. A huge and pronounced change in the bark colour over time here too. I think this may be a better form than ‘Jermyns’ but the jury is out. Not in leaf at all yet and no catkins.

To Belvoir Castle to plan further planting in the Carlisle Garden and at Croxton Park around the three lakes.

A trip in the sun below the castle to view the Japanese garden and our 12 year old camellia plantings here which are now maturing.
The markings on the bark of the Castanea sativa which are all 200 plus years old trees are extraordinary. Very different on different ancient trees.
A sorbus with all its berries still intact on the tree in April! Perhaps a Sorbus intermedia but not a Sorbus aucuparia variety I think. Odd that in such a cold winter the birds have ignored this tree. Could not find a definitive leaf to check.
Views across the ‘Japanese’ garden with the first camellias (x williamsii and not Camellia japonica!) showing. About four to six weeks behind ours in Cornwall but a really pleasant impact when seen through the mature trees in dappled sunlight. 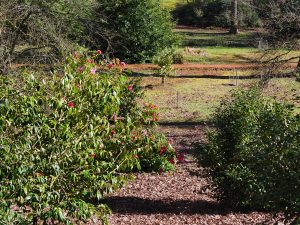 Views across the ‘Japanese’ garden with the first camellias
A Viburnum x bodnantense ‘Dawn’ late into flower on the drive with leaves appearing and quite a scent. Not exactly a nice one to me anyway.
The first magnolia which we planted at Belvoir as a present to Her Grace, Magnolia ‘Caerhays Belle’ just about to come out. Perhaps 15 years from planting just below the castle itself.

Hydrangea ‘Tricolor’ just coming into leaf. The odd yellow new growths will turn pure white but here they contrast nicely with the other leaves which are green edged white.

Hover on image below, then click arrows for more pictures…..

Easter Sunday.  A quick review of newly flowering magnolias in Kennel Close.  All these are three to six years from planting and have just been weeded, re-staked and the wire netting surrounds straightened and heightened on the smaller plants.

a) One initial but sizeable flower on Magnolia ‘Sir Harold Hillier’ which is an almost pure campbellii alba seedling originally from Chyverton. We have other plants.

b) First flowering (seen by me anyway) of Magnolia Kobus ‘Octopus’ and Magnolia Kobus ‘White Elegance’. Both look very vigorous but Octopus is the better flower.  A bit similar to Magnolia ‘Wodas Memory’ but smaller.

e) Magnolia ‘ Petit Chicon’ is nothing special as yet nor is Magnolia ‘Crystal Chalice’.

f) Magnolia ‘Yakeo’ is improving with age.  A small growing and floriferous plant whose flower buds bend over much.

So onto the drive to review Vance Hooper’s other introductions besides Magnolia ‘Genie’ and Magnolia ‘Brixton Belle’ mentioned earlier as excellent.

a) Magnolia ‘Plum Pudding’ is a nice shaped cup like Brixton Belle but a rather muddy colour and not one to get too excited about.

b) Magnolia ‘Cleopatra’, conversely, is a good colour but we need to see it full open to assess the final flower shape. Perhaps 6 or 7 out of 10.

The top plant below the leylandii but well up from Red Linney is labelled Magnolia ‘PhilipTregunna’ but is in fact another Magnolia ‘J C Williams’.  The plant at the entrance to Burncoose Garden from the nursery is similarly wrongly named. Clearly a daft batch mislabelled in New Zealand.

1959 – FJW
G H Johnstone came around for first time since 1957. White magnolia below Sutchuenense hybrids he identified as Mag elongata.

1948 – CW
No Maddeni out but reds and early blues. Daffodils well past best. Camellia reticulata at its best but others over except doubles. There has been a lot of hot sun and cold nights. Some hail the last week. Magnolia Diva and saluenensis types mostly over but have been very good.1943 – CW
I counted 17 Maddeni hybrids out in 40 Acres today. Two or three Auklandii out, 8 Michelias in flower, the best going over – Mag nitida has 50 flowers on top. Hard to get enough daffs for House – still a few good flowers on Mag sargetiana. 3 sorts of Peonies in Tin Garden – an iris opening, fuschias still in flower.

1909 – JCW
Later than 1907, only one poet Lulworth and that had a bell gap. Auklandii show no movement. Arboreum x Thomsonii open. Rhodo ‘1875’ is open. Argenteum is nearly at its best.

1907 – JCW
The show at Truro. No good de Graaf, all had been boiled out. No Auklandii’s there. The show was quite five days too soon. Poets were weak, and there were a lot of overcooked flowers.

1902 – JCW
Three fourths of the de Graafs and Weardale open, a few Lulworths, most of the de Graaf Triandrus that I bought last year, nearly all the Lulworth seedlings, most poets and nearly related hybrids of poets are bad in the [?].