Magnolia ‘Caerhays Belle’ is showing colour and coming out two to three weeks earlier than usual.

Also Magnolia ‘Delia Williams’ which is more on time.
Salix gracilistyla ‘Mt Aso’ with its delightful pink catkins is growing away well by the old dog kennels.
I make no apologies for more pictures of Jaimie’s new magnolia cross a day or two further along into its first flowering (M. sprengeri var. Diva ‘Burncoose’ x M. campbellii var. mollicomata ssp. ‘Lanarth’).
The famous Jury garden, Tikorangi, in New Zealand has been hit by Cyclone Dovi. Click here to see the devastation. Much as we faced here in the January 1990 hurricane. Looking back 32 years on it actually was the catalyst for the rejuvenation of the garden here and we now look back on it as a turning point in the positive evolution of the garden. A message of sympathy to the owners, Mark and Abbie Jury, with the hope for the same eventual outcome here. Storm Eunice a fleabite by comparison.

2021 – CHW
A work trip to view a coastal cliff garden which we first became involved with 10 years ago. Despite foul weather on the day there was ample proof that some coastal plants will indeed take everything that nature throws at them.

Acacia dealbata and Picea breweriana offsetting each other superbly.

The tree fern valley had grown and developed considerably in 10 years.
A good clump of Petasites japonicus coming into flower but slightly frosted.
A fantastic ancient Quercus ilex trunk on the top of a cliff in the teeth of westerly gales.
An equally impressive beech trunk suckering from the base as the main trunk has been pushed over in the wind and the light has got to the bottom of the tree.
Agave americana and Fascicularia in as exposed a position as you could possibly imagine.
Chamaerops humilis showing no worries either.
Agave americana ‘Variegata’ with a fraction more shelter.
A wonderful carpet of Vinca minor ‘Alba’ under a yew tree and behind a wall so it is totally sheltered from the salt spray.
2020 – CHW
A trip to the greenhouse today to inspect newly potted cuttings and seedlings (loads) and to see what is in flower.Tom Hudson’s gift of a wild collected Magnolia martinii (his number 3930) which has a different leaf form to ours at least in juvenility. Our plant has had a few yellow flowers in recent years.A few days later James Garnett from SEVE Nantes, France, got in touch about their Magnolia martinii:
[…] here is a glimpse of what is happening in Nantes, our Magnolia martinii flowered for the first time after 3 years. Nice fragrant yellow flowers!And this was my reply:
Our Magnolia martinii had one flower three years ago, nothing two years ago and just a very few flowers last season. The flowers look exactly like yours but our bush has a spreading habit rather than an upright one and the leaves do not look like ours; ours appear larger and less shiny on the topside. However, Tom Hudson has a rather different form of martinii which I hope to see in flower this year.
Camellia ‘Quintessence’ has a lovely smell today and is completely scenting the smaller new glasshouse.
Tom Hudson’s vireya rhododendron; Rhododendron sororium aff. has a single yellow flower (TH 3769). Too tender for outside growing.
Camellia x williamsii ‘Hiraethylin’ is an odd colour mix and quite nice.
Asia has grown a nice plant of the pure white form of Rhododendron racemosum. We have one very old plant in the garden of this unusual white form (normally pink).
Asia’s cutting grown plants of Michelia ‘Mixed up Miss’ are very well budded in 2L pots.
A clump of Ron Scamp’s Narcissus ‘Mr Julian’ full out on the top bank.
A clump of one of its parents, Narcissus cyclamineus, growing nearby.
The snowdrops which we dug and moved from The Vean before the building work there 12 years ago are already nearly over.
2019 – CHW
The branch is still hanging but we will hopefully pull it down later this week.
First few flowers on a Rhododendron calophytum hybrid above Crinodendron Hedge.
Magnolia ‘Leda’ is just coming out. Notice the splash of greenish yellow on the tips of the outer tepals. The name means ‘The Swan’ and it was raised in Mark Bulk’s nurseries in Holland.
Magnolia ‘Vairano’ came from Eisenhut’s nursery in Switzerland. I hope this is true to name?

Camellia gigantiocarpa has had a little of its new growth frosted.
More labels to go out on record trees with Karol. About 140 now in place with 25 to 30 to go. Two cries of ‘bugger’ as Karol manages to bust a couple with the hammer.
Camellia ‘Show Girl’ was nice on Rookery Path. Another new one to us.
These are our own young plants of what may be Camellia cuspidata or they may be Camellia taliensis? The habit is not that of Camellia tsai but the flowers are not that different. Anyway I am sending the photographs to Tom Hudson to prolong this amusing debate as to which of these three species is which. You can see saga unfold here…
The first high up flowers on Rhododendron sutchuenense by the Auklandii Garden.
Narcissus cyclamineus just out in the Auklandii.
Loads of ripe berries on Ilex perado var perado which is a UK record tree.
A young Camellia ‘Look Away’ flowering with us for the first time. Nothing special!
Nice but sparse single red flowers on one of the old (pure) Camellia japonica on the Main Ride.
Biscuit (front), Nuttie, Dexter and Nickel attempting to sit down.
Young Biscuit six months old.
Mr Billy being perfect as usual.
Magnolia campbellii ‘Strybing White’ is finally out in full with a blue sky behind it. The ‘dog shit on stalks’ has largely blown away.
We went to label Ligustrum confusum as a UK record tree but DISASTER!
Ross has now felled all the abies by Donkey Shoe but managed to badly scrape the replacement tree which had been growing beside it for the last 15 to 20 years! No comment.
A very light pink form of Camellia granthamiana by Orchid House Nursery. Not exactly a show stopper. Quite exposed here which it dislikes. The Burncoose plant is far better. Our other plant of this tenderish species has apparently died.
Magnolia ‘Todds Fortyniner’ finally full out three weeks or more from when it first showed colour. Relatively little frost damage is evident.

Outside the front gate is a seedling from the same seed pan as ‘Caerhays Belle’. Quite nice but smallish flowers which are a good pink against a clear sky which it was not today.

A similar unnamed seedling in Bond Street is also looking ok but with some wind damage. Both plants are worth their place if only in terms of being early.
Camellia ‘Dr Burnside’ just coming out by the Four in Hand. One of the very best early double reds but a month later than usual this year.
A second Magnolia mollicomata ‘Werrington’ hiding below Sinogrande Walk was a surprise. Just as dark as the one in Kennel Close. 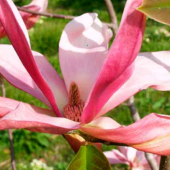 The final proof of the article written for the RHS Rhododendron, Camellia & Magnolia Group yearbook arrives with us. In a record early magnolia year, and since some of these are full out today, I attach the full article with pictures for the purposes of enjoyment, jealousy or longing – take your pick!
Up & Coming Magnolias – Read full Article

1935 – JCW
Fuschias cut not too badly, Camellias flowering well and the frost hardly harms them. Our Magnolia campbelli is very good indeed.Note at bottom of Garden Book page:
There is a pencil note in J.C.W Williams Magnolias saying
‘There came on Jan 22 – 1928 from Darjeeling 3 seeds of white Magnolia campbellii
I think only one grew and was planted below the top ride between Engine House and Tin Garden.
This flowered well March 1939. Larger than Campbelli and a pure white. The frost had burst its sap and in May it died to the ground. It broke again and made shoots of 2ft by October but very soft.

1925 – JCW
Well ahead of 1922 say ten days ago almost all the Sutchuenense show flowers or are open. Moupinense is about over, Blood Red Arboreums just at their best.

1922 – JCW
The double Prunus pissardi has been good for the first time. Prunus mume of Wilson is just over, Prunus clementinae not quite open. Scarlet Thomsonii hybrids good, two or three Sutchuenense hybrids are flowering, Rhodo lutescens and the early species of Sutchuenense are goodish. There is no Argenteum in bloom so far.