A pleasant surprise. At last an unnoticed Melliodendron xylocarpum is actually making good growth into a small tree. Flower buds too in some numbers but yet to show. About 6ft tall 10 years from planting and doing well now.
A small young Quercus acuta with acorns forming on the stems of last year’s female flowers and the old terminal male flower stalks still visible. The old tree has never shown us properly formed small acorns like this so another surprise!
First flower here on Magnolia ‘Purple Prince’ which we planted out the other day. You can just see the white insides of the tepals which makes this hybrid so special. First seen in The Valley Gardens at Windsor a couple of years ago. Late season flowerer.
Some of the yellow male catkins on Betula luminifera are a foot or more long. So profusely are they hanging on the tree that it looks like a weeping willow from a distance. This was a John Hillier collection from Sichuan. Two trees were planted here in 2004 but one lost its leader in a gale two years ago.
Betula pendula ssp. szechuanica ‘Liuba White’ was collected by Roy Lancaster in 1989 from 3,500 metres up from sea level in Sichuan and planted here in 2001.
I think these are new male catkins and old seed cones on Betula alleghanensis. They seem to match the shape shown in the Betula bible by Kenneth Ashburner but I do need to check further when the leaf is further out. I know that Roy gave us one of his own collections and guess this is right since it is right beside ‘Liuba White’.
Magnolia ‘Rouged Alabaster’ is hidden away in a shady part of the drive near the Trevanion Holly but long flowering and good close up at least a month after it first came out.
2018 – CHW
Another filthy wet day to cap off a depressing Easter weekend from a business point of view. The water meadows are flooded to record levels overnight. A nursery day to try to cheer everyone up after such a poor visitor weekend. The plants are all still in full dormancy with little sign of new growth yet. We have been lucky that the mail order held up so well (only £30k down on the previous March) – garden centre trading disastrous all over the country.
Datura sanguinea in the Burncoose conservatory flowering well out of its normal season (July to September) but rather good nevertheless.
Corydalis solida ‘Beth Evans’ in a group in the nursery. An impressive plant with no cold damage at all.
Rhododendron ‘Christmas Cheer’ flowering three months late in this peculiar year. Not bad though.
Distylum myricoides ‘Blue Cascade’ with its first flowers and new growth. Still to see any blue but presumably this will be evident in the new growth.
A quick trip to Old Park to view the magnolias in a drizzly afternoon.
Magnolia campbellii ‘Alba’ now full out. Hard to photograph against a grey sky.
A good Magnolia mollicomata, the best seen this year in fact.
An elderly Magnolia sprengeri ‘Diva’ now not covered by trees and starting to flower well.
Rhododendron sinogrande just coming out. One of several large plants in Old Park.
A good Rhododendron ‘Cornish Red’.
A very good clump of Rhododendron calophytum. Some pure white and some with a hint of pink just above the Beech Walk path.

A still and sunny day. The garden a torrent of scents and colour.

Rhododendron soilenhense is now at its absolute best.

Magnolia ‘Sunray’ just coming out. No great merit. There are lots very similar and not worth their place.
This plant of Rhododendron sinogrande was totally exposed to the wind after we made the veitchii clearing. Tiny leaves and struggling to live. Now that other things have grown up to protect it, flowers aplenty for the first time.
Rhododendron magnificum with its first flowers on the main ride.
The two old Magnolia soulangeanas on the main ride looking great in the sun.
Acer palmatum ‘Katsura’ is always very early into leaf with an initial orange hue turning yellowish.
Rhododendron calophytum beside the acer.
Rhododendron loderi ‘King George’ just coming out and a bit early. No scent yet.
First flowers showing colour on Michelia ‘Mixed up Miss’. Lots more still to come.
First flowers on this Rhododendron rothschildii. Not a species I ever remember growing here. Like so many of these big leafed species the flowers fade so quickly that unless you catch them just out it is hard to know which is which by colour anyway. Rhododendron eximium is next door and similar in colour if not in leaf.
Magnolia ‘Tinkerbelle’ – first flowering. Small flowers but a good reddish colour.
Camellia x williamsii ‘Ladys Maid’ is of US origin and very late into flower. Its buds have a nice way of hanging down on the bush before they open fully. Well worth growing.
Rhododendron lepidostylum plastered in flower in the Rockery. These have nearly all died out of old age on Burns Bank but this one is in its prime.
This Magnolia ‘Yellow Lantern’ was split asunder last autumn in strong east winds. We will wait to see where the new shoots spring from on the stem before deciding exactly how to trim and reform what is left into a sensible shape with a new leader so the plant can grow on again.
Rhododendron niveum on Sinogrande Walk. See how the flowers fade in colour with age.
This is one of a batch of my father’s azalea hybrids. Really quite nice and possibly worth a name?

2016 – CHW
An early morning tour of the garden with Ian Baldick and Raf (the young Dutch nurseryman who will be propagating and selling Ian’s new magnolia hybrids). Here they are with the huge flowers on the Magnolia campbellii Alba seedling on the main ride.

Then we stop in wonder, but in the rain, to observe the second plant of Magnolia ‘Caerhays Splendour’ on the drive which is just coming out. The flowers here are not as large as on the best plant but they are larger than the last year and the colour is superb.
On to the Fourburrow Hunt meet at Porthluney beach complete with a few antis in a blue four wheel drive car and balaclavas. About 60 riders in the rain and no real excitement except that of course the fox trail runs into the main garden (out of bounds) and the hounds run amok amid the visitors. No damage done. 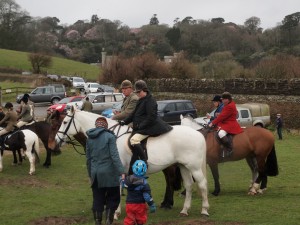 2015 – CHW
Tedious six hours in the car with usual roadworks at Birmingham. Big meeting to debate how to ping our broadband from Four Lanes (15 miles) to the estate as BT still will not install fibre optic cable to us. So speeds of 1 to 4 mbs for us for the foreseeable future or a big capital investment.

1933 – JCW
A lot of flowers of sorts. The Camellias are the best thing now though the best cherries won’t be long.

1932 – JCW
Camellia speciosa recovered the frost and flowered well after it.

1929 – JCW
Wilson’s Magnolia is very fine and as good as the best Campbellii. Kobus, the early one, may have a 1000 blooms open with 500 to come. Barbatums remain good now and have been out for over a month.

1925 – JCW
Just as in 1924 only the double sloe has less flower. Blood red Auklandii very fair and the whites starting. The Melianthera is the best thing at the place.

1924 – JCW
The double sloe is the best Prunus open. P pilosiuscula will run it close in a year or two, and Subhirtella ascendens is good in the Beech Walk. The daffodils are within a day or two of reaching their best.

1907 – JCW
Nice rain after a long period of bright sun and frosts. The first M de Graaf opening. Poets just coming through the spathe, several (nearly all) Weardales open, more than half the [?] things open.

1902 – JCW
The boys saw the first swallow. Blackthorn is good in most places.

1897 – JCW
Dorothy, H Irving’s, Flora Wilson, Beatrice Heseltine, P grandiflora all out. Cherries at their best, also the tulips in the grap.