Colin French found Sibthorpia europaea in flower in a boggy area above West Portholland. He had never seen this plant actually in flower in all his years of recording wildflowers in Cornwall. The flowers are tiny.

2020 – CHW
Work is now just underway on the conversion of ‘The Hovel’ into two new residential units for staff or retired staff. In my youth this building housed piglets which were grown and fed up with much mess, smell and rats, into slaughterable size by Gordon Trudgeon. The name of the building however derives from an even earlier use as a coal store (coal hovel) when coal was delivered by sea to Porthluney Beach and, as a highly combustible product, was not one which you stored in or near the main house. The building dates from the 1880s and was used in a film called ‘Dangerous Exile’ in 1957 with Finlay Currie who was then a big star and who gave my father a christening present for me (or so I was told by Dad). The film was a flop with lots of black and white running about on the cliffs in semi darkness. You can see it occasionally on channel ‘97’ on a very dull Boxing Day but I would not bother.

Until about 20 years ago the building was used by the keepers for pheasant rearing but this too was totally impractical in the building.

In clearing out decades of junk before the builders arrived we saved for posterity the two zinc lined canoes which my great-grandfather used to row out to Gull Rock in (three miles?). These were once housed in the boathouse at Porthluney Beach which is remembered only in old postcards (together with the jetty to receive the coal) from pre WW1. I guess the Home Guard demolished the boathouse in WW2 when the pill boxes and tank traps were installed.We expected to find the boat which the French criminal rowed across the Channel in WW2 and arrived at Porthluney walking up through the minefield unnoticed by the Home Guard. He claimed he was a refugee from the Nazis but this proved to be untrue. I actually think his two seater rowing boat rotted away on the lake 30 years ago but not before my brother nearly drowned falling off it into very muddy water aged four or five.

2019 – CHW
Nyssa aff. sinensis (FMWJ 13122) with reddish new secondary growth leaves. Autumn colour on young leaves! What this species may lack in flowers it easily makes up for in leaf colour.

Ehretia thyrsiflora with purplish secondary new growth after the recent rain. Look at the white speckling on the new growth bark as well. Very good. The botanists from Nantes recognised this in the spring but all the reference books are silent.
Mespilus germanica (planted 2011) with the odd late flower and a good crop of ripening fruit at the same time.
Crataegus combyi with its first fruits here. I cannot find this in the reference books so far but we have two decent plants.
Crataegus wattiana with now nearly ripe blackish fruits. We viewed this three weeks ago.
Carpinus polynura with attractive reddish new growth which I have not seen before.
Sorbus hupehensis can have white or pink berries depending on the exact form. We wait to see what colour these will turn into from this first flowering as a young plant.
2018 – CHW
Some rain and everything in the garden looking much healthier. We can now assess the drought damage.Lapageria ‘Flesh Pink’ is out about a month earlier than usual.
Ditto the elderly Lapageria rosea beside it.
A very drought ridden and now dead Hydrangea villosa.
This is the same robinia as I photographed six to eight weeks ago. I wonder now in view of its flowering span if it is Robinia x slavinii ‘Hillieri’ rather than Robinia hispida var kelseyi as I thought earlier. Both are said to flower in June but the leaf structure looks more like R. x slavinii? Not sure.
Laurel cutting on the Main Ride started today.
2017 – CHW
The Lapageria rosea has been out for about a fortnight but I had omitted to photograph it. Only one of the elderly plants survives.
A young plant beside it is doing well with some slug damage to the leaves. This was a gift from Tom Hudson planted with plenty of dung which may flower soon. 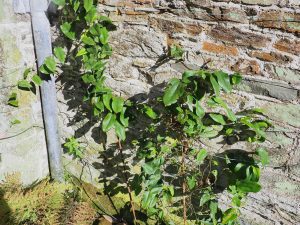 The Magnolia delavayi have all now been cut so the view of the sea from the lawn has been restored.
Paeonia delavayi var. delavayi f. lutea is losing its leaves and its seeds are ripening fast.

2015 – CHW
Oh dear, the first signs of disease on the common horse chestnut (Aesculus hippocastanum) below the Aucklandii Garden. Terrible blotching of the leaves but, since this tree loses its leaves very early in the autumn and they are on the very lowest branches, perhaps not a worry yet? Not the moth larvae disease but the other one? A first for Cornwall that I have seen if it is?

This is the time of the year when honey fungus strikes and, as the grass is cut, so some unexpected deaths appear. Here a Rhododendron Countess of Haddington by the cash point which was in its prime. There was a dead halesia tree here 10 years ago and the long black tendrils of this fungus or phytophtera have probably been living on decaying roots before striking out at something new.

Again it is amazing how close some magnolia seeds are now to being ripe and shedding seed. What a difference the heavy rain has made to seed swelling too in a fortnight. Good show of buds on many magnolias for next spring though too.  I have a whole section on the Burncoose website about propagating magnolias from seed.

1910 – JCW
We have cleared a large new piece to the left of Mr Will’s Path. The first major clearance for many years. I have found 4 seed pods on the nursery Stellata. A seed pod* on the Wall Garden, form Reticulata is still swelling. Lapageria well out. Auriculatums and hybs flowering very well.
* this picked off and found empty in November.