After last week’s rain a joy to see the new growth progressing on the big leafed rhododendrons and secondary new growth on many other things.

More seeds than usual on Decaisnea fargesii but yet to turn blue.
Camellia tsai with lovely red secondary new growth.
It is the small things that matter during grass cutting! Repeated new growth at the base of this sorbus again dealt with.
Broussonetia papyrifera again with plenty of seed balls.
Eucryphia moorei is over totally unnoticed but lots of seedpods which we need to collect. As I have said before this species flowers here at irregular times and has been out at Burncoose in late spring.
Lindera triloba is unmistakeable in leaf. Very attractive too.
A young Podocarpus falcatus covered in new growth.
Rhododendron maddenii was out 10 days ago but already plenty of tall new growth.
Podocarpus spinulosus with attractive light blue new growth.
A young female Podocarpus matudae covered in seed heads.
Aesculus parviflora full out.
Cherry fruits forming on Prunus padus ‘Colorata’. Expect them to drop before they ripen and turn black.
Tilia kiusiana still not quite out.
The wind has taken out the top of our best young Embothrium at Rogers Quarry.

2020 – CHW
Unexpected showers last evening but soon burnt off in the heat.

A nice clump of Euphorbia platyphyllos (I think) on the bank which has survived to flowering size because of no grass cutting.

I think Mr Norton was right but I think a Cleyera species yesterday and not Cleyera japonica ‘Fortunei’ which is flowering nicely in a compact shrub. Plenty of flowers but not easy to see. Asia ought to propagate this.
Liquidambar acalycina with wonderful secondary new growth.
Aesculus wangii with some too after the rain stunted its earlier growth shoots.
Sorbus commixta aff. var. sachalinensis with nearly ripe fruits already.
Jaimie gave this Magnolia nitida a hard trimming to try to revive it and some good new shoots on the stem. Too dark and exposed a place for it really.
Cladastris kentuckea is always the first tree here to show real autumn colour. I will try to photograph it each week.
Fruits on Halesia monticola.
Aesculus parviflora has become a big spreading/suckering shrub after a slow start. Are these the first signs of the Aesculus disease or are the shrivelled leaves on the topside of the plant drought? Flowering nicely.
A very ancient but lovely Rhododendron auriculatum (I think) although the one next to it is a similar sized Rhododendron decorum. Little scent today.
Plenty of berries setting on Crataegus laevigata ‘Crimson Cloud’.
2019 – CHW
Off to Burncoose for a video and photography day – intermittent but welcome heavy showers after a night of heavy rain. The Meliosma oldhamii at Burncoose did have more than the one flower I had originally thought. Nearly as many as the Caerhays plant actually.
Long hanging trusses of lichen growing from the branches of an elderly yew tree overhanging the walled garden. I have never seen it here before in 35 years. Clean air indeed.
Hoheria ‘Glory of Almwich’ just coming into flower in the tunnels.
The acers and magnolias have just arrived (bare root) from New Zealand and been potted up. The acers look far better than last year while the magnolias are on the small side.
Our Illicium floribundum stock plant with just one flower left.
2018 – CHW
Everything looking better after the rain!First flower ever on Metapanax davidii. Rather similar to a fatsia flower I think.
Holboellia latifolia with its purple seed pods. Another new first for us (or me anyway). Another direct result of a hot summer.
Sorbus rosea (SEP 492) with first fruits forming but not yet pink.
This was the Sparrmannia africana cut to the ground in the ‘Beast’ and thought by Asia to be dead. Eight foot or more of new growth.
Rhododendron ferrugineum with secondary flowers in a pot in the new greenhouse. A species which we had lost.
Massive leaves on a young Magnolia macrophylla. This will replace the one planted out this spring which has died in the drought. Expensive loss!
Magnolia ‘Star Wars’ is performing again with a new flush of secondary flowers much redder than those in the spring.
2017 – CHW
You seldom see teasels in Cornwall but they are common on the Isle of Wight. Here growing away by the entrance to a bio digester in Newport which we had a trip around. Dispacus fullonum is the Latin name for teasel which the finches so enjoy eating when the seeds are ripe. Growing here on waste ground to 6ft with some flowers out and some setting seed. Would they sell in the catalogue I wonder?
2016 – CHW
Off to Ventnor Botanics again with the Caws and the Thorpes in torrential wind and rain. We were almost the only visitors and everything looked battered. The gardens may be ‘the hottest in the UK’ with only 28 inches of rain per year but today they were Cornwall in a good, foggy, westerly gale.A few new things today to admire although the pictures will be poor and fuzzily damp:Kniphofia ‘Ice Queen’ – not sure I have ever seen a pure white ‘red hot poker’ before.

Olearia virgata, I think, in flower in the rain.

Sorbaria tomentosa (possibly) var angustifolia with one flower still out.

An unidentified fuchsia species with panicles of flowers six to nine inches long and large blue-green furry leave. The shrub was five to six feet tall.
(This has now been kindly identified as fuchsia boliviana by Russell Beeson in his comment below, I have to agree.)
A rather poor picture of Chitalpa taskentensis in flower on a hot sunny bank. A tender and difficult plant even in Cornwall which I have only ever seen in flower before in pots in the nursery.
A eucomis species with white rather than green flowers. Not the Eucomis bicolor which we stock.

Olearia coriacea was another new dwarfish species in this vast collection of this genus here.

Saw the first swift here today over the pond (evening) and watched some other youngsters yesterday out of the window at a rather critical and decisive if not terminal Cornwall Farmers board meeting at the Arundell Arms in Lifton (Devon). If the swifts have bred at the castle this year I have not seen them.What a joy to have two weekends on the trot to settle into life at Caerhays and enjoy the garden with no public here or public functions to attend and all the time in the world to look at plants and research (and covet old and new ones!) them properly. I cannot remember this happening for several years. Time to think, children all married (John and Katie visit), dogs happy, work absolutely up to date. Weddings at Coastguards Hut and Vean so everyone busy earning money apart (for once) me! Glorious Twelfth and The Cottage loom soon but Wi-Fi and Gmail access will still be necessary nearish there. Technologically illiterate I admit!

So now time to investigate Hydrangea paniculata hybrids on the drive which are coming out and making a show a bit later than all the hortensus varieties. Mostly planted 2007 or 2009.

Hydrangea paniculata ‘White Lace’ – above Red Linney on bank. Distinct and dainty habit as its name implies. Very nice and would do in a large pot.

Hydrangea paniculata ‘Pink Diamond’ – by Hovel turning in a huge clump of around eight feet tall. Very floriferous in full sun. Opening white, then a hint of pink, then pinkish allover.
Hydrangea paniculata ‘Vanille Fraise’ – a newer form planted only five years ago on the bank of The Fernery. Pretty ray florets which again open white then turn pale and finally deeper pink. Benefits from pruning. I think this would be my first choice in the paniculata varieties although Hydrangea paniculata ‘Unique’ which is much taller growing is the current best seller at Burncoose. 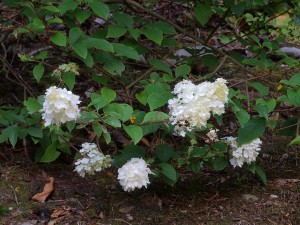 1952 – CW
It has been very dry for long. Lapageria coming out – Auriculatums good and hybrids. Prophortum nearly over. Big wall Magnolias about at best – a few cyclamen. Hydrangeas very dried up. A few of the late Auriculatum pink hybrids still out. Eucryphia pinnatifolia at its best. An odd flower on Nymansii.

1942 – CW
One lapageria out – Eucryphia pinnatifolia beginning to be good, also white rho hybrids. A few 2nd flowers on Mag sinensis, many on big Parviflora, and on all 3 evergreen Mag on big wall. Rho didymum very good in places. Romneya at its best. There has been a lot of rain since early June and shrubs have grown well.

1909 – JCW
Buddleias nice, Romneyas good, nothing else. Daff seed sown, bulbs nearly all in, one year olds to plant.