A visit to Newquay Garden Centre which is a long oblong site and not in Newquay at all; Quintrell Downs in reality. More gifts and café than plants but the plant area was well laid out with a reasonable range of more common plants. Of the local garden centres I have visited recently Bodmin garden centre was by far the best for plants.

Cordyline australis ‘Pink Passion’ – quite similar to one which we do stock.
Ilex aquifolium ‘Myrtifolia’ which would be a good hedging plant.
Forsythia ‘Fiesta’ – attractive leaf colouration even without the early season flowers.
Cistus ‘Gold Prize’ – vulgarly attractive with its largely yellow but three tone coloured leaves. A short lived plant I expect but a showstopper.
Leucanthemum ‘Ooh La Spider’ – silly name but a good ruffled flowered form.
Interested to see these willow creations which would look good in the right situation if pruned and maintained. Stupidly I forgot to look for a price.
Then on to the Roseland Plant Centre who used to be trade customers of the nursery when we once did van sales. It appeared to have become a bakery and tearooms with a huge yurt. A few tired bedding plants and not much else at all. Took not a single photograph!
2020 – CHW
The variegated leaved Buddleia ‘Harlequin’ has largely reverted to ‘Royal Red’ above the top wall but is still a magnet for butterflies. Many flowers are already over but a second flush now accompanies the latest rain induced growth.
Cornus drummondii ‘Sunshiny Drops’ is now in flower and a rather good yellow it is although the name refers to the subsequent berries.
Maakia amurensis has no obvious flowers today but the Maakia hupehensis which has such gorgeous blue spring new growth most definitely does. The small tree blew over years ago and has become a low mounded shrub which makes the flowers more reachable. John Marston’s excellent garden vlog this week made me go and have a look at our plant. Every week during lockdown I have found something new to covet on the walks in his garden.

Four Crataegus species with fruits have coloured up well in 10 days:

Crataegus combyi – likewise.
Crataegus aprica is only just turning.
Crataegus schraderiana in a similar state although it was the last of these four to actually flower this year.
2019 – CHW
The hydrangeas viewed from the top lodge looking down the drive – what a sight today.
As I stop to look at hydrangeas I find a Camellia japonica literally plastered with nearly ripe seeds. Hundreds on a small plant in full sun.

The hunt for Eucryphia and Hoheria out in early August revealed that it is still a bit early for most but not all of them.

Hoheria angustifolia is now 25-30ft tall with dense foliage and tiny leaves but, today, the tree is plastered in flower as you can see here.

I catch the scent of the last few flowers on Rhododendron maddenii amid the Hoheria clump.
Hoheria sextylosa ‘Pendula’ still in tight bud.
Amazingly I find a tail end flower still properly out on Magnolia laevigata but seed pods forming too.
Plenty of seed pods on Styrax obassia and nearly ripe already.
A flower finally out on Magnolia kwangtungensis (formerly Manglietia moto) and a bit on the dull side! It may have been better yesterday. Most of the earlier buds have dropped off the tree perhaps in the drought or perhaps eaten by squirrels. Only a few left at the very top (20-25ft) of the tree.
The first seed pods ever here on Halesia macgregori which I do not think I actually saw in flower. We have two or three young plants of which this is the smallest and least upright growing.
The huge Eucryphia nymansensis ‘Nymansay’ has a few flowers out but mainly still in bud.

2018 – CHW
A tour with Peter Mills and the first real trip all over the garden for three and a half weeks yesterday.

Sea fret and drizzle while the rest of neighbouring Europe hits over 40°C.

Hydrangea quercifolia ‘Snow Queen’ is already turning an autumnal pink in the drought.

Magnolia ‘Todds Fortyniner’ is usually the first magnolia to flower in January. Here are secondary flowers too.
And a few on one of the old original two Magnolia salicifolias.
The first seed capsules ever on Polyspora longicarpa. They may not be ripe for two or three months but Asia needs to keep an eye on them to collect when they are.
Gingko biloba ‘Variegata’ with its irregular leaf variegations was looking good in Kennel Close.
Flower buds showing and nearly out on Tilia kuisiana. This was in full flower in September last year.
Fruits forming early on Acer cappadocicum.
The only Hoheria sextylosa so far performing properly after the ravages of the ‘Beast’.
Grass cutting finished today in Castle Wood. Old Park still to do but both machines broke down yesterday.
2017 – CHW
Then Will and Mary Caw’s garden.A fine hollyhock growing 8-10ft.
Euonymus japonicus in flower as a clipped garden hedge.
Pears – ‘Doyenne du Comice’ is the one with clusters perhaps?
A good crop of plums on a wall trained plant with all the new growth clipped out to put more energy into the fruits.
Mr Caws with his pride and joy (still sober)! The crop of sweet pea flowers is nearly over but a better crop by far than last year.
2016 – CHW
Finally we hit the jackpot on the last day in Seaview. The brand new Eddington House Nursery is beside the church in Brading only two miles away. Brand new stock too and a startlingly good plant display with good growing display beds to ponder and everything excellently laid out. Lots of new things to consider here.Commelia colestis may well be a bit tender but it is a vivid blue and might be available from Kernock as a plug liner? We used to stock this once and it sold well. What else is blue in flower in August?
Sedum ‘Gold Mound’ may be dwarf and a rockery plant but it is still quite striking. No idea about its flowers.
Ligularia gigantea ‘Giant Scabious’ was living up to its name with white flowers. Five to six feet tall. Very difficult to grow in a pot!
Perouskia atriplicifolia ‘Little Spire’ grew to about 18 inches and had delicate but attractive flowers as you can see. Arguably nicer than Perouskia ‘Blue Spire’.

Then we get to some outstanding new agapanthus varieties all in full flower. We certainly need to add some of these to our catalogue (and to sell at Hampton Court) and drop some of the New Zealand varieties. 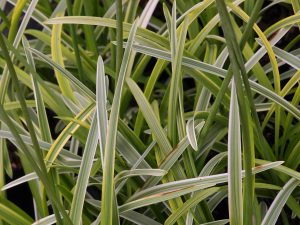 Agapanthus ‘Windsor Grey’ – whitish grey in bud and tall growing. Quite excellent and arguably better than Agapanthus ‘Queen Mum’. A must get for Burncoose.
Agapanthus ‘Inkspots’ – dwarf to medium growing with dark buds opening darkish blue. Perhaps as good as Agapanthus inapertus ‘Graskop’.
Agapanthus ‘Sandringham’ – a very good sky blue – medium-tall growing.
Agapanthus ‘Bressingham Blue’ – taller growing and very floriferous. Not quite as dark as Agapanthus ‘Navy Blue’?
Agapanthus ‘Lavender Haze’ – lower growing and a gentle light blue.
Rudbeckia ‘Peking’ – very nice but perhaps not that different from others taken on this Isle of Wight trip?
Sisyrinchium ‘E K Balls’ – almost a rockery plant but striking blue flowers in profusion. We used to stock other dwarf sisyrinchium.
Persicaria amplexicaulis ‘Fat Domino’ – a very striking red and not insipid like some of the other knotweeds especially Persicaria bistorta ‘Superba’. Grows to about two and a half feet, flowers to three and a half feet.
Coprosma ‘Pacific Dream’ – not that different but this is the one being sold everywhere in the Isle of Wight today.

2015 – CHWA quick trip up the drive to catch a few more hydrangeas:

Hydrangea ‘Tricolor’Rather an insipid plant especially when grown in a cold, hot, exposed position as here. The leaves have yellow and white on their edges and the lacecap is a weak colour. Needs to be grown in more shade and shelter. Planted 2002.

Hydrangea ‘Joseph Banks’At Burncoose on the drive the clump is still going strong 120 years after featuring in a picture in the RHS Journal. Nearly as old here I guess. Creamy white opening to a pale blue (on acid soil) and lasting to Christmas without frost. The commonest hydrangea seen in Cornish woodland garden drives but none the worse for that.

Hydrangea ‘Sheila’Not unlike ‘Love you Kiss’ once full out but this pink lacecap is one of the more improved and newer forms which stands out as being a bit different to the norm. This clump was planted in 2011 and has darkish new growth and early leaves.

Hydrangea aspera Villosa GroupVery variable and short lived especially if grown in full sun which this one is not. Some have flower heads remarkably similar, at least at a distance, to some smaller forms of Hydrangea sargentiana. I reckon about 30 years in full sun and 40 in the shade. The lovely peeling bark only appears in maturity on some forms after say 10 years. A popular hydrangea but I prefer larger leaved Hydrangea sargentiana.

A raven feeding a single youngster by the Top Lodge ominously near a young lamb which must be a ‘mistake’ at this time of the year. The most horrid and damaging of all the corvids.Swallows have bred well at the Hovel but, in the early mornings, the telephone wires are already full of martins and swallows thinking about migration or perhaps just more bad weather as the harvest is scheduled to start?

Three weddings this weekend at The Vean / Coastguards Hut. A new record for the estate and Luke, new Vean manager, formally appointed. Today’s party seems to involve a ‘Mr Wacky’ who appears at the front door when lost and I hope is here to entertain children at the wedding. Otherwise the staff are in for a shock!

1990 – FJW
It could have been the hottest day since 1911 or nearly. Last limited shower about 5 days ago. Trees look terrible.

1915 – JCW
Buddleia at their very best but not much else. Philadelphus delavayi also good and late cuttings for Mr Ivey. The Auriculatum open in the sun also R ungernii and decorum.

1913 – JCW
Buddleias by the Cattlehouse fair, it has been too dry for them. Some nice roses and geraniums. P imperialis has been good. R maddeni at the brown gate is good.