Four very different forms of Hydrangea sargentiana:
One outside the front gate.
A smaller paler version beside it.
The Donkey Shoe plant which grows where the old original died.
The surviving old original plant in the Auklandii Garden.
A new clump of Hydrangea paniculata ‘Polar Bear’.
You could be forgiven for thinking there are now too many newish forms of H. paniculata that are not much different. Hydrangea paniculata ‘Skyfall’ is however a good new variety.
Tree felling of the two beech and the pollarding of the oak have made a good new planting area for the autumn.
At last after several failures we have at least one Melliodendron xylocarpum going ahead.
Pomaderris elliptica is about to flower.
Seed heads on Viburnum hoangliense.
Why did the tree surgeons have to burn the laurel hedge rather than having the fire on the tree stump itself?
Rhododendron emarginatum (CW + T 6278 1/9/2012) with two flowers. The Pocket Guide to Rhododendron Species says this is a Pseudovireya which I find hard to believe.
Lilium superbum
I have no idea what this orange-red rhododendron is but am delighted that we have layered it now.
So “nothing” out in the woodland garden in late July!

First flowers out on Hoheria angustifolia.

A young Magnolia delavayi with its first flowers. This plant was a gift and is certainly a different form with what appears to be less tepals than normal.
A final flower on Magnolia globosa with seeds now fully formed as well.
Secondary flowers on Magnolia ‘Spectrum’ on Hovel Cart Road.
A garden tour with Rob Hunt who was staying at The Vean.
2019 – CHW
A nice new thing in the greenhouse frame to go out next spring – Ailanthus altissima ‘Purple Dragon’.
Gordonia axillaris was planted in 1991 but I have never yet seen it flower here.
A few huge seed pods are forming on Magnolia obovata ‘Pink Flush’. The largest is about 10in long and covered with bristles which are turning reddish.
This is (I think) Rhododendron aperantum which I have never seen in flower here but did once much earlier in the year at Werrington. The flowers are almost double and seem to have two corollas. Is this a secondary flowering? The buds are rounded and reddish opening more rose pink-white. Very few flowers on what is now a 5ft tall erect shrub.
A young Pieris with secondary new growth or perhaps it has been so dry it is only now coming into growth?
Cercidiphyllum japonicum ‘Pendulum’ with its trailing ‘skirt’ nibbled by roe deer.
Rhododendron fortunei ssp. discolor full out in the main quarry and splendid as usual.
Secondary flowers on the old wisteria by the Playhouse.
A very dark self-sown dierama below the wisteria.
And next to it the first flowers on Crinum powellii.
2018 – CHW
Following the visit to Tregrehan earlier this week I had promised to compare photographs of our two Lithocarpus cleistocarpa (100+ and 50 years old) with the Tregrehan one planted in 1992 and viewed there.The comments I made during the visit were:1. The younger leaves and the leaves on some branches here were rounded rather than all pointed as on the Tregrehan tree. Examples here to make the point. Perhaps wind damage in the ‘Beast’?
2. We had found, over the years, just the odd occasional small acorn on the ground under our oldest tree (they did not germinate). This had suggested to my father that our tree might actually be a quercus rather than a lithocarpus? This has to be nonsense as these pictures clearly show loads of male lithocarpus catkins. I could not however find any chubby female inflorescences where a group of lithocarpus seeds would set. The odd acorns we have found presumably got carried there by squirrels and were actually nothing to do with this tree. Later in the year I will need binoculars to check the top of it for seed clusters but none have ever been seen here before in 100 years.
3. The younger of our two trees has a whiter sheen on the undersides of its leaves than the Tregrehan plant or our older one. This appears to be correct but the plant is growing in the open on a hot bank rather than in some dappled shade.
4. I have tried to compare the bark. Clearly the bark on an older tree will not look much like a 26 year old one. Sadly our younger plant has too much moss (and ivy) on its trunk to make a fair comparison.
The conclusion is however that we are indeed both growing Lithocarpus cleistocarpa. It will grow from cuttings!
2017 – CHW
More from Ventnor.Muehlenbeckia complexa completely covering and smothering an Olearia dartonii as you can see.
Hedychium gardnerianum out rather earlier than with us.
Crinum powellii ‘Album’ looking very fine and no slug damage!
Clerodendron trochotomum growing as a small suckering tree and just coming out.
Melianthus major with its odd seed heads ripening after flowering. I have never seen this on our Burncoose stockplant.
Firmania simplex in full flower. Note the huge leaves with five lobes.
Musa basjoo growing as a huge multistemmed clump. Leaves 6-8ft long. Tallest stem perhaps 18-20ft. No flowers in evidence.
The very rare Mallotus japonicus in full flower and new growth. A male form of this dioecious tree. The ‘food wrapper’ plant.
No idea what this evergreen climber is so need to look it up! Rather extraordinary! Probably an aristolochia?
I could not identify this yellow flowered plant last year but was being thick. It is Caragana brevispina. Here just setting its pea seeds.
Ceratonia siliqua looking very fine in full growth.
2016 – CHW
Ventnor Botanic Garden have acquired a few more plant labels since last year which is good. I have not visited in late July before and much that is new to me is out in the South African garden. Conversely the echiums seem to have taken over far too much, decimating a lovely bank of libertia and looking rather horrid now that they are all over.Several outstanding new plants to think about getting:This (I assume) is a cuphea species in the car park which is attractive.

Swathes of lavender in the herb garden were superb.

Anisodontea capensis is not that hardy but an excellent coastal plant in full sun. Should we stock it again? 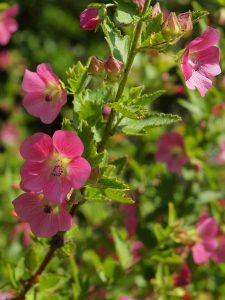 A new plant for our 2017 catalogue here in full flower. This rather odd South African salvia species certainly has an odd flower and remaining bract – Salvia africano-lutea (Beach salvia).

Crassula coccinea with striking red flowers. Much better than our Crassula sarcocaulis.

Banksia ericifolia with its yellow ‘pineapple’ flower – new to me.

Olearia argophylla (musk wood) – dullish but a new species to me.

Melaleuca hypericifolia was a much more impressive bottlebrush.

Abutilon ‘Red Bells’ a larger flower than our Abutilon ‘Ashford Red’ and taller growing. About 10-12ft tall here and free standing in shelter.
2015 – CHW
Went in search of an elusive late/last July camellia flower but nothing found today. Need to look for Camellia mathotiana varieties in full shade to have a chance but it has probably been just too hot in June/July this year. There is a chance if I have time at Burncoose on Thursday below the paddock.

The old original Hydrangea sargentiana struggles on. A rather insipid flower with few florets at the edge but very large. The slugs have done great work on the leaves after the weekend’s rain despite them being hairy, and you would have thought, unpalatable. Large snails perhaps?

Two more even later flowering plants at the top of the Azalea indica clump in the Auklandii Garden. Surely the last azaleas to show colour this season and, although red, a slightly different red to the ones photographed a month or more ago. Worth propagating just for this purpose?
Here is the long promised and frequently cut down Escallonia ‘Iveyi’ named after the daffodil gardener at Caerhays pre 1900. It is a hybrid between a Brazilian species called Escallonia bifida and Escallonia xexoniensis; itself a hybrid raised at Veitch nurseries in Exeter. It got an RHS AGM in 1891! So Mr Ivey may have even made the cross himself pre 1880. I do not see JCW having any interest in crossing escallonia especially in the (pre Chinese) daffodil era. Still perhaps the nicest escallonia I know and a freestanding shrub for the shrub border not even a faintly hedging variety. As it is a Caerhays bred plant I can be biased. Presumably a daffodil gardener was a bit short of work in July!

The five Magnolia ‘Caerhays Splendour’ in the old paeony bed have survived the heatwave and grown rather well in their first year of planting. Slug bait is essential to keep the first set of leaves undamaged on newly planted magnolias. Long may they last (as now)!Pheasant poult losses in Brownberry Wood are nearly 2,000 after the weekend’s torrential rain. Replacements impossible as now too late. Good job we did the four extra late hatch offs but we had better go steady on letting any more days and hope no disease hits us on top of the wet/cold disaster with eight week old birds. I fear a wet August after such a dry spring and summer. Thank heavens the rearing field is now only on gas heating after three power cuts on Saturday which would have caused chaos with the electric hens. Not lightening or thunder (apparently) but a transformer on fire somewhere.

1906 – JCW
A few cyclamen. The R auriculatums have started well.