The rain this week has been exactly what the garden and the farm crops have needed. I saw the first two swifts last night but did not see them go to their nest site in the tallest tower eaves. A good 20 house martins happily building their nests and mating away. Hopefully more pairs will appear any day. No sign yet of the swallows in the back yard which have hatched two or three broods above the dog kennels in recent years. A good show of grey wagtails on the lawn but I have yet to see a flycatcher there.

Here is a good bit of refutation of one of the many COVID conspiracy theories floating about in the ether of social media:

All good clean fun for the conspiracy theorists but just another example of how mad this is all getting.

However I do not see much Chinese involvement in our 5G networks happening whatever the government said pre COVID.

The wisteria on the camellias and over the building below the Playhouse is at its best today after another good night’s rain.

Surprising how many camellias still have decent flowers on the last day of April:

‘Primavera’
‘Matterhorn’
‘Ruby Wedding’
‘Drama Girl’
reticulata ‘White Form’
Cercis chinensis ‘Avondale’ with its first flowers two years on from planting. Mostly the flowers are on the main stem.
Pyrus ‘Pashia’ with attractive new growth which I had not seen before.
Pterocarya tonkinensis just coming into leaf but already with attractive bark.
The Taiwanese form of Trochodendron aralioides with early flower and interesting new growth.
A young Rhododendron smirnowii with its first two flowers.
Azalea ‘Salmon Pink Cushion’
Magnolia ‘Woodsman’ x ‘Patriot’ still with its extraordinary range of colours from blue to yellow.
New growth on Agathis australis.
Supposedly a young Staphylea holocarpa (white) but I do not think so!
Maakia chinensis with its attractive silvery new growth.
A carpet of sycamore flowers on the Main Ride after the rain.
Rhododendron ‘Corona’ is named after Corona North once from County Carlow in Eire which is where I first saw it. A plant also to layer. Quite a show today!
First flowers on a young Magnolia wilsonii which are hard to photograph.
Rhododendron ‘Bow Bells’ (williamsianum hybrid) fades from pink to light pink as does its parent.
Azalea ‘Melford Lemon’ looking stunning today. I have never taken in this clump before. Azalea ‘Crosswater Red’ is not yet out next door.
Viburnum setigerum just coming into leaf and flower. Nice new growth.
Magnolia ‘Honey Flower’ too young to take much notice of yet.

2019 – CHW
An IDS tour with 30 people. Wonderful trip with knowledgeable people from all round the world. Two and a half hours was not enough. Click here for their ‘Thank You’ email and photos.

Opposite Rhododendron fragrantissimum is nearly full out.
Tropaeolum ciliatum growing vigorously but no flowers as yet. Last year it was out by now.

Then on to Tregothnan for an evening tour.

The first time I have seen the newish tree paeony collection in flower. There has been loads of hassle with the labelling and with the survival rate. As usual with Chinese suppliers many turned out initially not to be what they were supposed to be.Paeonia ‘Superb’

2018 – CHW
Off to the greenhouse to sort through seedling rhododendrons then to be grown on in the frames and others to the nursery bed in the Rookery. Asia has done a superb job in the last six months to get the production line of replacement plants going. So many species live only short lives that if you forget to propagate they are gone. With the closure of Glendoick nurseries, at least for mail order, where else in the UK can you actually now buy rhodo species in variety? Defra is probably to blame for turning all rhododendrons into invasive beings in the public perception.

On the way above the greenhouse is Magnolia ‘Sunsation’ with its very erect and upright habit. One of the better yellow mixtures but many of the Sunsomethings are very similar indeed.

A Clematis forsteri cutting with a few flowers.

Menziesia ciliicalyx var purpureum flowering in the greenhouse. These plants will eventually be for the Rockery as they are fairly dwarf in habit. Menziesia have only recently been added to the genus rhododendron rather than being on their own. Odd to understand how these flowers are rhododendron-like? Menziesia are now all Rhododendron multiflorum! More botanist bollocks!
Prunus ‘Shogetsu’ is pink as it opens then turning white. The natural shape of the tree is umbrella-like. Very fine in the sun today. Certainly as good as Prunus ‘Shirotae’ which has a similar habit.
The swan has decided to nest again in the same spot as last year where it hatched off only two cygnets from eleven eggs. Neither survived to maturity and the last one perished in late January when its parents drove it away.
The newly buried electric cables in Beach Meadow left us on the generator here for a day.

Rhododendron ‘Surrey Heath’ is another good yakusimanum hybrid which is one colour in bud and when first out but quite another when full out. You can see both outside the nursery entrance where some have had more full sun than others.

A fine clump of Hebe ‘Wiri Charm’ in flower in the nursery. Nearly over in fact.
Rhododendron radicans is a true rockery species with a short life and, as here, the flowers can be variable in colour.
Rhododendron ‘Graffito’ is a new introduction to the website. A tough old hybrid by the look of it but still only one bud today.
Rhododendron ‘Gartendirektor Rieger’ has faded a bit but nice red spots in the bells. Shy to flower in a pot and only one in the row has.
Magnolia acuminata var subcordata nicely in flower in a pot. This is a small growing form of the ‘cucumber tree’ and the one from which so many of the newer yellow magnolias have been bred. Not a huge flower and a variety of yellow hues as the flower develops.
The first time I have seen Magnolia ‘Jersey Belle’ in flower. A cross between Magnolia wilsonii and Magnolia sinensis but showing, in its anthers at least, more wilsonii than sinensis in terms of colour. The plants are grafted which is a surprise but the flowers are very fine. Sadly too early for Chelsea where it would have been a show stopper! Furry indumentum on the new growth too which is more sinensis than wilsonii.
What a show on the batch of specimen sized plants of Calycanthus raulstonii ‘Hartlage Wine’. Some held back in the cool for Chelsea.
Do not the Viburnum plicatum ‘Kilimanjaro Sunrise’ look a great batch too. This is the larger size. No pink yet in the flower but it will come.
The new clump of Rhododendron royalii flowering for the first time in the Burncoose garden. It died out at Caerhays years ago but was just as dark as these when in flower on the drive.
I went to hunt down Viburnum cinnamomifolium in the garden to compare it with the Viburnum cylindricum seen in Wales with berries but as yet no flowers. Seems I was nearly too late for the flowers here but the leaf is similar. New growth more like Viburnum odoratissimum. Three quite similar species if that is what they are?
This is a pure white form of Abutilon x suntense we think which Clare has acquired and hidden in the office for ‘safe keeping’. Hopefully it will go on to a happier life in the propagation house soon. Hilliers claim this as a chance seedling they found in 1975. In their nursery called ‘White Charm’. It does not look like a white Abutilon vitafolium but we could be wrong?
The Olearia scillionensis is full out beside the car park already. A bit too early for butterflies to enjoy it today!

2016 – CHWThe season is racing on alarmingly quickly and no matter how many times you go around the garden there are still many surprises to take in before you miss them for another year.

Crataegus chinensis in flower in the greenhouse is a new plant to us.

Staphylea holocarpa ‘Rosea’ is especially fine above the greenhouse. Strangely the pure S holocarpa (white) nearby is not showing colour yet.
Rhododendron edgeworthii x leucaspis is full out and nearly over in just 10 days.
Nearby the pure Rhododendron edgeworthii is in a similar state. Note the larger and more bullate leaves.
Rhododendron ‘Martha Wright’ is out in the rookery nursery. A new scented hybrid for us bred at Glendoick.
Rhododendron moorii is ready for planting out next spring to replace the old clump by Georges Hut which is dying of old age. The second time in a generation that we have had to start this medium sized species off again.
Beside it are two nice plants of Rhododendron ‘Wine and Roses’ coming out. The underside of the leaves has bright purple indumentum.
Above the green gate two ‘new’ magnolias are out for the first time (to me). The Magnolia x veitchii seedling from Chollipo in Korea has huge flowers just over and the Magnolia ‘Sweet Merlot’ is full out with some leaves emerging. One day they will look splendid from the castle lawn.
2015 – CHW
A filthy day with some rain and a strong south east wind. Perhaps a good night for lamping!
Two new first time flowering magnolias (to me anyway):

Magnolia ‘Rose Marie x Black Tulip’ is a very late flowerer and darkish red but lacks the neat shape of Black Tulip.  Do not see this being one for the public at large even if it does get awarded a name.

Magnolia ‘Carlos’ is yet another pale-ish yellow but has no particular distinguishing marks that would make many people want to grow it.Good to see yellow flowers on Yellow Lantern from the front door today.  A new first for Caerhays as the plant is tall enough to show up (against the new beech leaves behind) above the wall by the old play house.

Three Syringa pinnata full out outside the front gate.  I first saw this very unlilac-like syringa at Altamont Garden in south Ireland 10 years ago and had no idea what it was.  Susyn Andrews had one in a bag at Rosemoor.  She is probably the most knowledgeable botanist/plant identifier in the UK so we appear to share a ‘like’.

Also Berberis insignis var insignis flowering for the first time having just shed its large and very prickly old leaves.  Rather ‘floppy’ but perhaps it will square up in time.

I am not one for herbaceous woodland plants but Cardamine pentaphyllos on the drive was always a favourite of my mother’s.  The white form seems to have died out beside the purple on the drive.

1944 – CW
All daffs over in Tin Garden. Auklandii still very good. Magnolia rostrata and fraseri out also. A good many Maddeni hybrids. Single peonies and two double out in Tin Garden.

1900 – JCW
Audreana shows colour. Many Iris germanica open, daffs are nearly over except Marvel and recurvas not yet open.

(Handwritten note attached to Garden Book page re planting out of Oaks and Magnolias in Oct 1927 to Feb 1928). 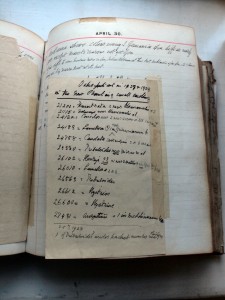 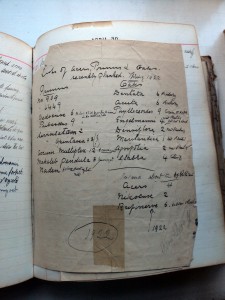